This page provides information on how to recognize landslides; scroll down for more information.

Contents on this page regarding recognizing landslides:

Every landslide, or slope movement, is unique, and is best judged on a case-by-case basis. The specific behavior of individual landslides is most often unpredictable, even when studied in detail. When they will move, and by how much, is often speculative. Cycles of wet weather with above average rainfall, particularly when followed by storms with intense rainfall, trigger landslides. Three common landslide types (or slope movements) in North Carolina include:

Landslides from Hurricane Frances(September 2004) — The remnants of Hurricane Frances tracked across western North Carolina on September 8, 2004. In addition to flooding, property damage and interruption of transportation corridors occurred owing to landslides and downslope movement of earth and rock triggered by very heavy and intense rainfall.

Landslides from Hurricane Ivan(September 2004) — The remnants of Hurricane Ivan tracked across western North Carolina on September 16-17, 2004. In addition to flooding, property damage and interruption of transportation corridors occurred owing to landslides and downslope movement of earth and rock triggered by very heavy and intense rainfall. 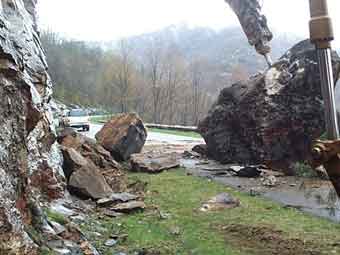 Debris flows are rapidly flowing mixtures of soil, rock particles and water. The media, when referring to debris flows, often uses the term "mudslide". The soil mass that initially moves is usually a rocky, silt-sand mixture that is not highly plastic or cohesive (i.e., one that contains a lot of clay). The lower cohesion allows the soil to "liquefy" during heavy rains and move rapidly, up to 30+ mph down slope. Once movement begins, there is often insufficient time to reach safety. Debris flows often originate in hollows on steep mountain slopes where thin (<6ft) soil overlies hard bedrock. The failed soil mass usually (though not always) travels down an existing drainage and accumulates into a lobe-shaped mass near the toe of the slope. Steeper slopes (>25-30 degrees) combined with a long run-out distance between the point of origin and the flatter toe-slopes create the potential for fast movement.

Indicators That Further Movement is Likely In The Upslope Area

Debris (soil-rock mixture) or earth (clay-silt soil) slides usually move at a slower rate than debris flows because the water content is too low for the mass to "liquefy". This can be due to the higher clay content of the soil that requires more moisture to liquefy. Movement rates are typically on the order of inches per day to feet per day, particularly during wet periods. During wet weather cycles, slides can be self-perpetuating. Initial movement opens tension cracks and scarps providing pathways for water to infiltrate deeper into the slide mass, thereby further decreasing the stability of the slope. Further movement widens existing tension cracks and scarps allowing more infiltration pathways, and so on. Shearing along the slide planes usually decreases the strength of the soil, a further destabilizing factor.

Each case is unique, and involves evaluating a number of alternatives. Stabilizing a slope can easily exceed the monetary value of a house. Covering a slope with plastic or placing rock on the slope is a short-term tactic, at best. It is very easy to waste money on attempts to stabilize a moving slope.

1. Can the structure, such as a mobile home, be moved to a nearby stable or safe location?

2. In most cases, the successful long-term stabilization of a slope above or below a home requires the services of a geotechnical engineer experienced in the soil and rock types in the affected area.

3. Knowledge of the extent, geometry and properties of the unstable material relative to the structure must be known, or conservatively assumed, to help ensure successful, cost effective stabilization. For example, if a home is built on an embankment, what is the extent of the embankment and where is pre-existing natural ground surface?

4. Are the unstable slopes above or below the structure - or both?

5. Can the unstable material be removed or regraded to leave a stable slope?

6. If the unstable cannot be removed and preserve the structure, can the slide mass be stabilized in place?

7. Does the design life of the stabilization equal or exceed that of the structure to be saved?

8. What is the allowable differential settlement of the structure to be versus the degree of settlement allowed by the stabilization effort?

9. Walls over 4-6 feet high should be designed by an experienced geotechnical or structural engineer familiar with the materials used in the wall and the material being supported by the wall. Common types of successful, engineered retaining walls used to stabilize slopes above and below structure:

11. Walls typically used for landscaping, (e.g., railroad ties, or stacked treated lumber) have severe limitations when used to stabilize a slope to protect a home. Timber walls typically have a design life of less than 15 years.

Rock slides and rock fall usually occur along roadways, but can occur on any modified or natural rock slope. They can occur in conjunction with heavy rainfall, but often occur at other times, usually without notice. Freeze-thaw cycles and wedging by tree roots can loosen blocks of rock from a slope. Rock can easily weigh 165 pounds per cubic foot, so not much moving rock is needed to cause damage or injury. A rolling and bounding basketball-sized rock can easily go through a roof. Rocks slide or fall because of pre-existing planes of weakness within the rock mass. Where these planes of weakness are inclined toward and intersect an excavated slope, the odds of a rockslide increase.

Stabilizing a rock slope is usually very expensive and requires specialized equipment along with engineering experience and expertise. Examples include: