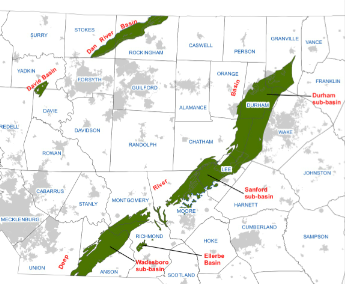 The N.C. Geological Survey, housed in the Department of Environmental Quality, has concluded that a viable reserve of natural gas may underlie parts of the state's Triassic basins. Technically recoverable gas is thought to exist in the Sanford sub-basin (including Lee, Chatham and Moore counties) and possibly the Dan River sub-basin (including Stokes and Rockingham counties). Further information on the geologic survey assessment can be found below.

Current technology allows shale gas to be recovered from shale formations with high organic content. Modern exploration and gas production technology, such as horizontal drilling and hydraulic fracturing, has enabled the extraction of shale gas in similar formations in other states. Hydraulic fracturing, also known as hydrofracking or fracking, is a process used to stimulate production of natural gas from shale or other impermeable rock formations. The process involves drilling a well into rock that contains natural gas, injecting fluids under pressure to fracture the rock, and extracting the natural gas from the fractures that are created.

Prior to 2012, North Carolina’s laws (Article 27, G.S. 113-378 through 113-423) regulating oil and gas exploration and production were dated and did not address the technologies commonly used in shale gas exploration and production, such as horizontal drilling and hydraulic fracturing. In July 2012, the General Assembly ratified the “Clean Energy and Economic Security Act,” or Session Law 2012-143. This law reconstituted the state’s Mining Commission as the Mining and Energy Commission, and charged the commission with developing a modern regulatory program for the management of oil and gas exploration and development activities in North Carolina, including the use of horizontal drilling and hydraulic fracturing.