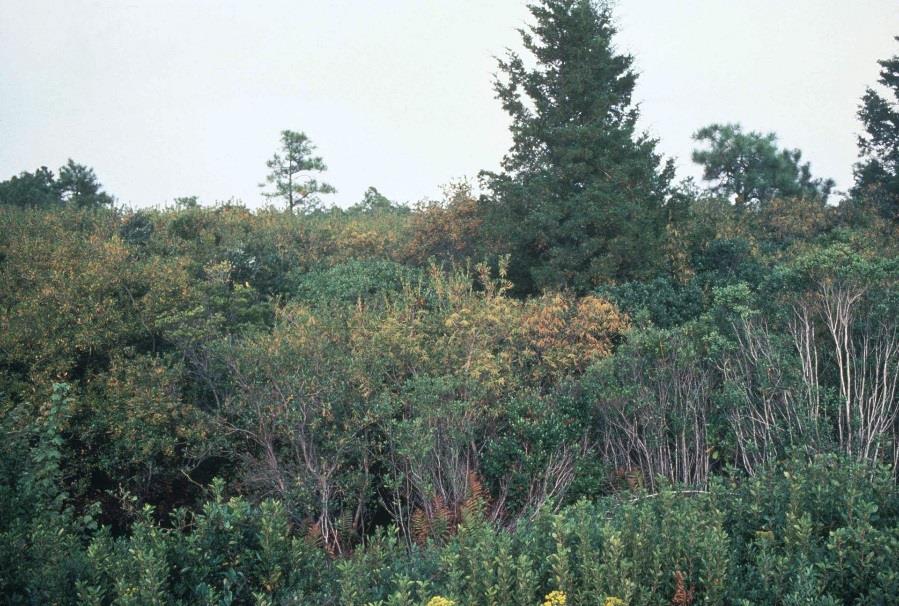 Pocosins are naturally-occurring freshwater evergreen shrub wetlands of the southeastern coastal plains with deep, acidic, sandy, peat soils. Pocosins are formed by the accumulation of organic matter, resembling black muck, that is built up over thousands of years in the unique conditions that exist on these wetlands. Several inches to several feet of organic matter can be built up under the correct conditions, making these lands a carbon sink for North Carolina. While pocosins are referred to as wetlands, they are not completely covered in water and support a large mix of wildlife.

In the 1960’s pocosins still covered nearly 2 million acres in North Carolina, 75% of the pocosin ecosystems in the United States. By the 1980s, drainage of the lands for forestry and farming operations had totally or partially altered all but about 700,000 of these acres. Under drained (or drought) conditions, the pocosins emit a significant amount of carbon.

The Evans Road Wildfire was a smoldering peat fire in Eastern North Carolina that started on June 1, 2008, caused by a lightning strike during North Carolina's worst drought. It lasted for 3 months and burned 41,534 acres inside the Pocosin Lakes National Wildlife Refuge.

There are two projects to restore North Carolina’s pocosins to their natural state. Hydrology restoration involves re-wetting peat soil that was ditched and drained years ago. This re-wetting raises the water table, sequestering large amounts of carbon in the soils, creating better wildlife habitat, providing protection from catastrophic wildfires, and improving water quality. See the links below to find out more about these projects.