Trash to Treasure: Urban and Community Parks Made Possible Through Cleanup Work

Some North Carolina communities have found ways to turn trash into treasure – with the help of the department’s Brownfields and Pre-Regulatory (PRLF) Landfill programs.

Wilmington is home to the Cape Fear Regional Soccer Complex – a park that houses seven full-size soccer fields on top of the old Flemington Landfill that closed in the late 1970s. The seven existing fields occupy the northern half of a former landfill property and were redeveloped in 2007 by Cape Fear Soccerplex, LLC (CFS) under a North Carolina Brownfields Agreement.

Now, the city of Wilmington has even bigger plans for the continued redevelopment of the park. With a $10 million bond it attained in 2016, the city plans to construct additional fields in the currently undeveloped southern half of the former landfill.

The state’s Brownfields Program facilitates the safe, productive redevelopment of contaminated properties by providing developers with assistance in defining how to make brownfields properties safe for redevelopment.

And the PRLF Program addresses contamination from landfills that closed prior to January 1, 1983, when waste disposal permitting regulations began. The PRLF staff have worked with communities to transform these former dumps into places of recreation, not only creating a valued gathering spot but also an economic boost for the area.

In Wilmington, these programs are allowing remediation activities and community development to go hand-in-hand. 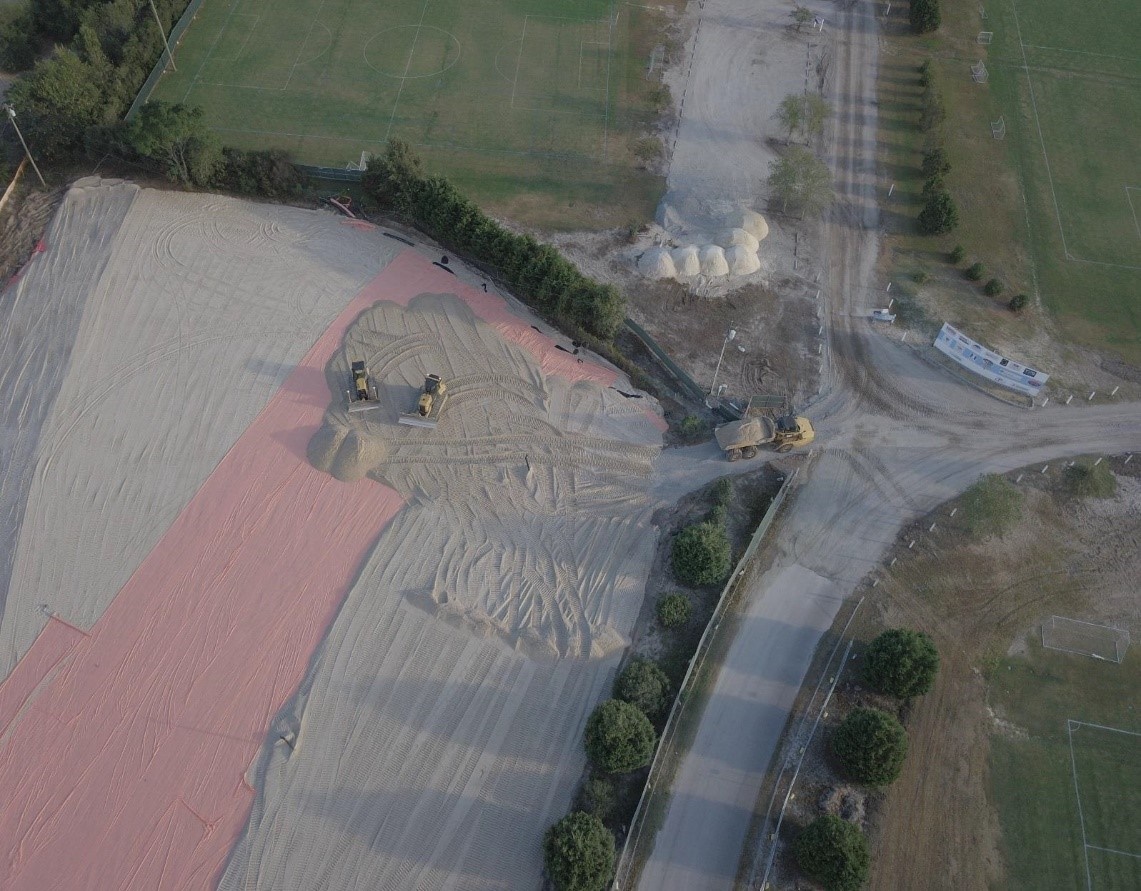 The city has been working closely with the non-profit Wilmington Hammerheads Youth FC on a proposal that would transfer 70 acres to the city for development of seven additional soccer fields.

The PRLF staff spent more than seven months working on unused portion of the property to install protective measures. This included capping the landfill and installing a barrier system and a ventilation system to address the old landfill’s elevated methane levels.

“The landfill has been addressed so that it doesn’t pose elevated health risks or threats to humans and nearby wildlife,” said Charlotte Jesneck, Inactive Hazardous Sites Branch supervisor in the Division of Waste Management’s Superfund Section. “Now, this space is ready to be developed on in a safe and efficient way.”

Part of the PRLF’s remedy at the property included clearing 35 acres of woods that had grown on the south end of the site since the landfill was closed. Clearing activities were crucial to making the property ready for a safe, planned expansion of the soccer fields.

The Wilmington Hammerheads have already witnessed the current soccer park’s success. In May, the team hosted a soccer tournament, which brought about 275 teams to Wilmington. It is one of two annual tournaments hosted by the Hammerheads. The two events bring an estimated $8 million in economic impact to the Wilmington area from the hotel and restaurant industries.

“People love coming to Wilmington from out of town,” said Carson Porter, executive director of Wilmington Hammerheads Youth FC. “But our field space is limited, so we’re always selling out and turning people down for our tournaments. Doubling our field space instantly increases our economic impact, but also allows more teams who want to play soccer here to get involved.”

The City Council of Wilmington accepted the donation of land and approved a resolution on July 16 to move forward with the management agreement, but for the Hammerheads, this is about more than economic impact.

“What we’re really concerned with for this expansion is the opportunity to provide a first-class athletic facility for the children in our community,” said Porter. “Compared to other large cities, our athletic facilities are not up to par, so this is an opportunity to provide our kids with this great facility. In my mind, the end goal is to see children in our community really enjoying this space, whether that be playing lacrosse, football, ultimate Frisbee, or of course, soccer.”