North Carolina's estuaries and coastal ocean are showing signs of habitat degradation and loss such as increasing shellfish harvest closures, large extent of impaired waters, frequent algal blooms and fish kills, and declines in seagrass extent. Threats to coastal fish habitat come from a variety of sources. Habitat degradation not only impacts fish, but coastal economies.

Often fish use multiple habitats over their lifetime. In fact some fish use multiple habitats in a single day, and its not too hard to imagine a fish using all these habitats in the same day. This mobility between habitats that fish demonstrate means that to protect North Carolina's fishery resources we cannot simply protect one habitat. Southern flounder is an example of an estuarine species that uses different habitats and waters throughout its life cycle. 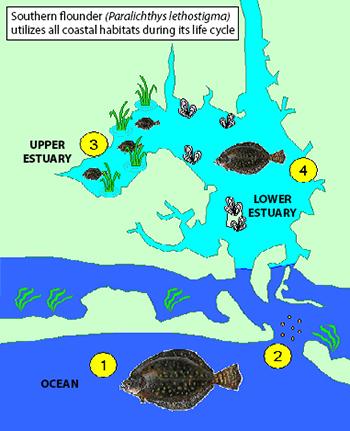