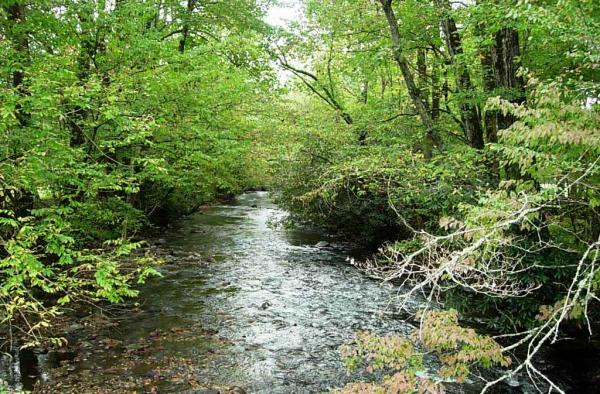 The North Carolina portion of the Hiwassee River basin is 644 square miles and is located in the southwestern corner of North Carolina’s Blue Ridge Province of the Appalachian Mountains. The headwaters of the Hiwassee River originate in North Carolina and north Georgia. It flows west into Tennessee and eventually merges with the Tennessee River. The Tennessee Valley Authority dams the Hiwassee River for production of hydroelectric power, forming Lake Chatuge, Appalachia Lake and Hiwassee Lake in North Carolina.
The Hiwassee River basin is largely rural, with much of its population located in and around Hayesville, Murphy and Andrews. It comprises most of Cherokee and Clay counties, which had a combined population of 33,000 according to the 2000 census.
Only about two percent of the area is considered urban. Agricultural land is important in the basin, with nearly 20 percent of the area in cultivated crop, pasture and managed herbaceous vegetation. However, most of the land in the basin is forested, with about half of the forested land located in the Nantahala National Forest, which comprises 32 percent of the land area in the basin.
The basin contains 22 14-digit watersheds.  In 2001, five were prioritized as Targeted Local Watersheds (TLWs) in the Watershed Restoration Plan for the basin. In the 2008 update, an additional seven watersheds were newly identified as TLWs and one TLW had its status removed. In total, 11 watersheds are prioritized as TLWs by EEP in the 2008 RBRP document. The 2018 interim amendment is intended to provide current information regarding planning activities, supplement information regarding land cover within each 8-digit hydrologic unit, restore document links and maintain accurate contact information.
Document to test- to be removed shortly
Excel file to test- to be removed shortly