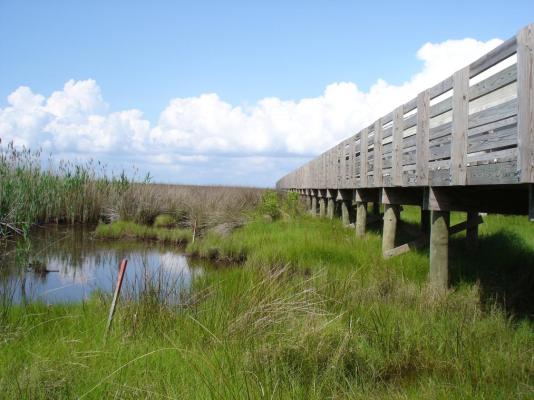 The Pasquotank River basin (USGS CU 03010205) begins in the Great Dismal Swamp in Virginia. This CU is an expansive area of flat to gently sloping land surrounding the Albemarle Sound. Several major river systems flow into the Albemarle, including the Chowan, Perquimans, Little, Pasquotank, North, Roanoke and Alligator rivers.

In the eastern portion of the CU, Currituck and Croatan sounds run from north to south and are bound on the east by the Outer Banks. This CU is about 2,140 square miles including both land and open water.

Edenton, Hertford/Winfall, Elizabeth City and Kitty Hawk/Kill Devil Hills/Nags Head are the largest municipalities in the CU. The CU encompasses 45 14-digit hydrologic units and contains part or all of nine counties in the coastal plain. Waterbodies in the basin exhibit a broad range of conditions, from the brackish waters of the Albemarle Sound to the tidal freshwater marshes of the upper Currituck to freshwater rivers and streams throughout. Unique in this CU is Lake Phelps, a large shallow lake located in Pettigrew State Park.