Is widely known to be an important primary producer and fishery habitat in shallow coastal environments and estuaries. The North Carolina Marine Fisheries Commission has by rule [15A NCAC 31 (20)] designated SAV as a critical habitat in coastal waters. The Fisheries Reform Act of 1997 requires the Marine Fisheries, Coastal Resources, and Environmental Management Commissions to work together to develop plans that protect and restore fisheries habitats. DMF’s Coastal Habitat Protection Plan (CHPP) was developed to do just that.

Collaborative research in 1998 that characterized and mapped SAV in the Neuse River indicated a diverse range of SAV along the Neuse and Tar-Pamlico Rivers in shallow, low energy areas. DWQ built upon this previous work, including a vast effort to incorporate the tributaries of these major rivers.

SAV coverage data was collected using the most accurate GPS method available. Three years worth of data have been collected and digitized using ArcGIS. Approximately 750 miles of shoreline have been observed with SAV. Calculating shoreline length and the distance of SAV from the shoreline resulted in over 5.5 square kilometers of SAV coverage to date. These data will serve as an important tool in the permit review processes across multiple agencies that will be ultimately geared towards the CHPP plan.

Mapped SAV locations, annual reports, and data collection procedures are made available at the links below. 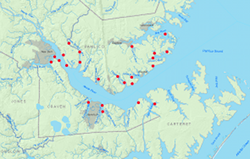 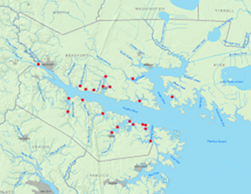