Brownfields and Breweries: Rising to the Top (part 3)

Each of the 260 craft breweries in North Carolina have their own unique flavor in both the brew and the ambiance. There are a select few that have a distinct story to tell because they sit on abandoned, unused, old manufacturing properties that have been repurposed through the North Carolina Brownfields Program.

In parts I and II of this series, we highlighted five of the eight such breweries across North Carolina. Each is distinct; the commonality is that they were all built on abandoned properties that now add to the economic vitality of their respective communities. 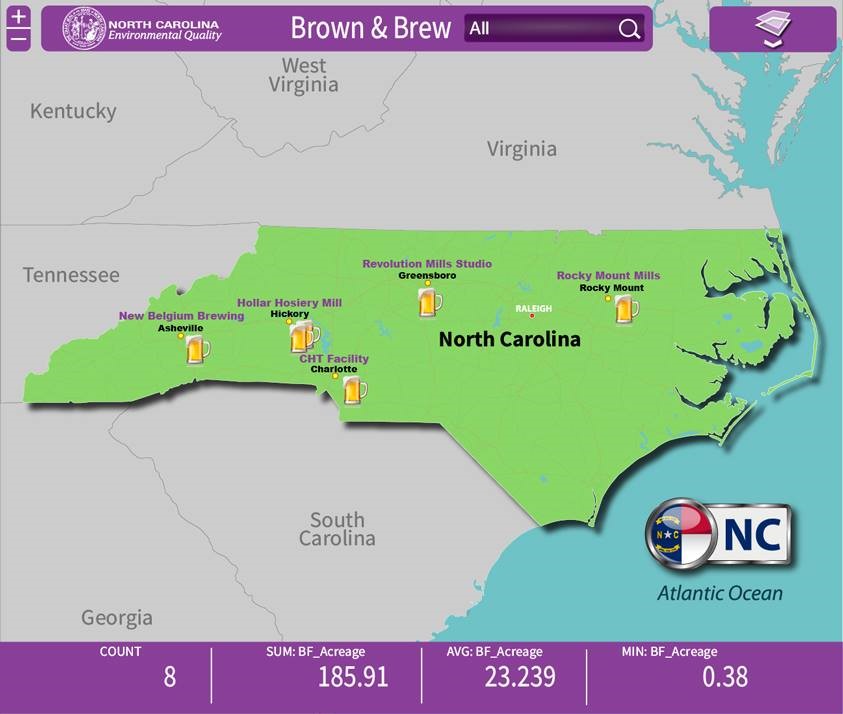 Notable Brownfield Breweries in the Piedmont and Eastern North Carolina

Continuing east, we venture across Three Spirits Brewing in Charlotte. The old Catawba Charlab site was used for warehousing and manufacturing of textile dyes, additives and other chemicals until 2010. Following environmental assessment and brownfields implementation, the property houses a fitness training facility, storage and Three Spirits Brewing. The latter brings a distinct zest and downhome coziness to Charlotte.

Welcoming you to the 25-acre Revolution Mill campus two miles from downtown Greensboro is Natty Greene’s Restaurant and Market. The Revolution Mill site is the historic Cone Mills textile mills that operated until 1984, making denim and flannel textiles. A developer saw the potential and began working with the Brownfields Program in 2012 to conduct environmental assessment, perform site cleanup and renovate certain buildings. The site includes residences, more than 75 businesses and parking. The brainchild of Natty Greene’s owner Kayne Fisher, the Restaurant and Market incorporates Greensboro’s Natty Greene’s craft beer with good food and charming atmosphere.

Towering above the Tar River in Rocky Mount in what was the home to the second oldest and longest continuously running cotton mill in North Carolina is Rocky Mount Mills. The old mill manufactured yarn and had its own hydroelectric power generation facility. After it closed its doors in 1996, the mill remained primarily vacant and unused. The developer has worked with the Brownfields Program to turn the old mill and surrounding mill village into a multi-use site with businesses, restaurants, residences and breweries. What makes Rocky Mount Mills’ breweries different is that it is an incubator program, allowing five to seven brewers to collaborate and master their craft. It’s really a one-stop-shop!

The eight breweries highlighted in parts I, II and III of this series give a taste of North Carolina’s diverse and beautiful landscape. Their stories will forever include recycling abandoned properties into a very tasty reuse.