Division of Marine Fisheries Director Kathy Rawls put on her fishing boots and went to the beach at Cape Point in Hatteras this week, but she wasn’t trying to hook a fish. Rawls was targeting the anglers who line the surf; she wanted to meet them, face to face, to talk about fisheries management.

Among the conversations was the best way to handle and release the large red drum caught at Cape Point this time of year. Proper handling increases the chance that the red drum these fishermen release will survive.

Rawls has been director of Marine Fisheries for about 11 months. She has made outreach and education a priority and has been looking for new ways to communicate with the masses.

“More than a million anglers fish in North Carolina coastal waters each year, and the overwhelming majority of them do not attend fisheries meetings or call the Division office to talk about fisheries issues,” Rawls said.

When she saw recent social media posts showing the strong red drum bite at Cape Point, she took the bait. With the help of Marine Patrol officers and their beach patrol side-by-sides, Rawls was able to meet most of the anglers who were fishing at Cape Point that day.

“They seemed surprised that the fisheries director would come out to talk to them, but they also seemed appreciative,” Rawls said.

She didn’t come empty handed. She gave the anglers bags with circle hooks, fish towels and other goodies, as well as educational materials about Division of Marine Fisheries programs and a flyer on proper handling techniques for red drum.

Red drum is North Carolina’s state saltwater fish and the Outer Banks is famous for its giant red drum fishery. Red drum can grow to more than 50 inches in length, obtain weights of more than 70 pounds, and commonly live more than 40 years.

In 1984, a giant red drum weighing 94 pounds, 2 ounces was caught off Hatteras Island. It broke both the state and all-tackle world record, and it remains the International Game Fish Association All Tackle world record for red drum today.

Additionally, while red drum reach maturity at about age 4, or 32 inches, studies have found that protecting the larger red drum ensures the most productive spawners are available to sustain the population for future anglers to enjoy. For this reason, it is important for anglers to handle these fish in a way that will increase their chance of survival when released. 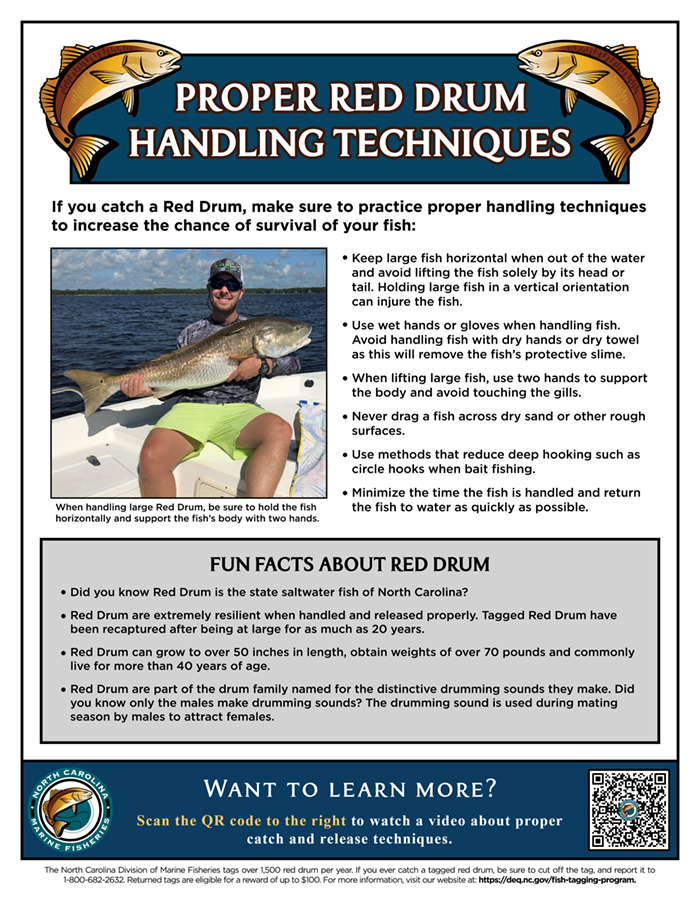