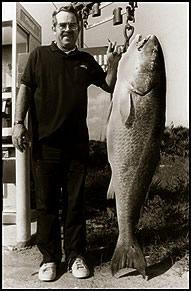 North Carolina is famous for its trophy-sized red drum that can weigh in excess of 40 pounds. They are traditionally caught in the surf and sound between Oregon Inlet and Cape Lookout. In 1984, a giant red drum weighing 94 pounds, 2 ounces was caught off Hatteras Island. It broke both the state and all-tackle world record, and it remains the International Game Fish Association All Tackle world record for red drum today. North Carolina waters also produced 18 of the current IGFA Line Class (Conventional Tackle) world records, one IGFA Tippet Class (Fly Tackle) world record, and one IGFA Junior and Smallfry world record.

Red drum derive their name from their color and the fact that during spawning time, males produce a drum-like noise by vibrating a muscle in their swim bladder. The color of red drum ranges from a deep blackish, coppery color to nearly silver. The most common color is reddish-bronze.

Red drum is the accepted common name for this species by the American Fisheries Society, but they are also called channel bass, spottail bass and redfish. Juvenile red drum – those aged 1 to 4 years – are called puppy drum. Red drum are related to black drum, spotted seatrout, weakfish, sea mullet, croaker and spot, most of which also make drum sounds.

Fisheries scientists refer to the species as Sciaenops ocellatus; Sciaenops is Greek for perch-like marine fish and ocellatus is Latin for eye-like colored spot. The Latin term refers to the black spot (usually one, but sometimes two or more) on either side near the base of the tail. Scientists believe that the spots may fool predators into attacking the red drum toward their tails instead of near their eyes, allowing the drum to escape.