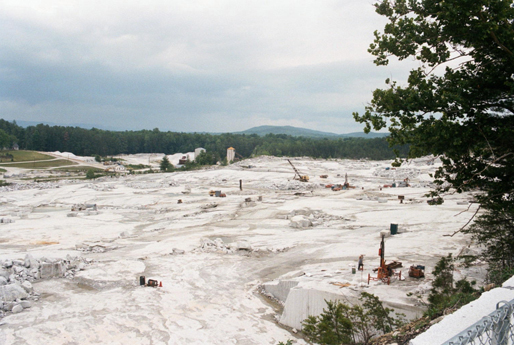 Courtesy North Carolina Granite Corp.-- This is a view of the Mt. Airy dimension stone quarry that is located near Mt. Airy, Surry County, North Carolina. Shown here are many of the elements of a dimension stone quarry. Granitic material is being mined. The active mining area is at the right part of the image. Some of the buildings where blocks of dimension stone are cut and shaped are shown in the left part of the image. Some quarried blocks are shipped directly from the mine face. Most of these quarried blocks are transported by container ship overseas to the far east and to other world markets. This quarry has been in continuous operations for over 100 years.  Granite is the official State Rock of North Carolina.

DESCRIPTION AND TERMINOLOGY Dimension stone can be defined as natural rock material quarried for the purpose of obtaining blocks or slabs that meet specifications as to size (width, length, and thickness) and shape. Color, grain texture and pattern, and surface finish of the stone are normal requirements. Durability (essentially based on mineral composition and hardness and past performance), strength, and the ability of the stone to take a polish are other important selection criteria.

Although a variety of igneous, metamorphic, and sedimentary rocks are used as dimension stone, the principal rock types are granite, limestone, marble, sandstone, and slate. Other varieties of dimension stone that are normally considered to be special minor types include alabaster (massive gypsum), soapstone (massive talc), and various products fashioned from natural stone.

USES Dimension stone is used extensively in home improvements, historic preservation, exterior and interior paneling for buildings and construction applications. Most dimension stone was sold or used as rough blocks for building and construction, flagstone, curbing, ashlars and partially squared pieces, and monumental and memorial stones in 2000.  Dimension stone is sold as rough stone, primarily used in construction. Dressed stone represented 45% by tonnage and 54% by value of the total stone sold or used in 2000 according to the U.S. Geological Survey. The largest uses of dressed stone, by tonnage, were in flagging (28%), ashlars and partially squared pieces (20%), and curbing (10%).

JOBS/ECONOMY The dimension stone  industry in North Carolina employs several hundred people. The  number of employees at a dimension stone operation ranges from two or three to as many as 170. The average number employed at any one operation is probably about 10-20 people.

PERMITTING/ENVIRONMENT The North Carolina Mining Act, passed in 1971, and its regulations require any dimension stone mining operation of one acre or more to apply for and receive a North Carolina mining permit. The permit is issued for 10 years, but can be withdrawn if all requirements of the permit are not complied with. Many other local and state permits and environmental regulations control the operation of dimension stone plants. All sites must be reclaimed before the reclamation bond will be released at the conclusion of mining.

Once reclaimed, dimension stone quarries are desirable as water reservoirs or recreational lakes, often with residential subdivisions nearby. Wetlands are often created as a result of mining. The industry is very sensitive to and responsive to its need to be a good steward of the environment and a good neighbor in the community.

PRICES According to the U.S. Geological Survey the average 2000 value for dimension stone was $188 per metric ton. The average unit values for different types of dimension stone were granite, $270 per ton; limestone, $151 per ton; sandstone, $100 per ton; marble $228 per ton, and slate $495 per ton.  Prices are substantially different not only for the kind of stone but also for the appearance of the same kind of stone. Color, grain structure, and finish contribute significantly to price and marketability.