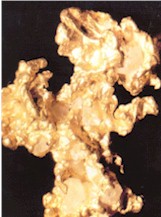 An indispensable source for the historical background of gold in North Carolina is Gold Mining in North Carolina:  A Bicentennial History, by Richard F. Knapp and Brent D. Glass.  The book can be ordered from the Historical Publications Section, 4622 Mail Service Center, Raleigh, NC  27699-4622, or call (919) 733-7442.

U.S. Geological Survey Professional Paper 213, Gold Deposits of the Southern Piedmont, is a good source of information, but is also out-of-print. The U.S. Geological Survey distributes several pamphlets on gold prospecting. Information on USGS publications is available at1-888-ASK-USGS (275-8747). Many book stores and rock and mineral dealers sell books on gold panning and prospecting.

Gold has been an important part of North Carolina’s history since 1799, the date of the first authenticated discovery of gold in the United States.  North Carolina was the nation’s only gold-producing state from 1803 until 1828, and continued as a leading producer until 1848 when gold was discovered in California. Below is some information on gold in North Carolina.

By about 1830, the leading mines in North Carolina were hard-rock mines rather than surface placer operations.  Output probably peaked in the early 1830s and again in the late 1840s. The most famous mines in the South were at Gold Hill, where one shaft eventually reached a depth of 800 feet.  Writer andillustrator Porte Crayon visited Gold Hill in 1857 for Harper’s New Monthly Magazine and created the best surviving images of antebellum Carolina mining.  The federal government built a branch mint at Charlotte which coined southern gold from 1838 until the start of the Civil War in 1861. 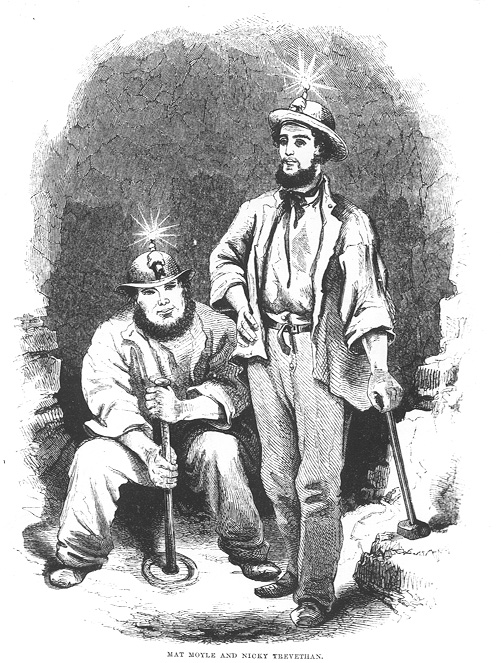 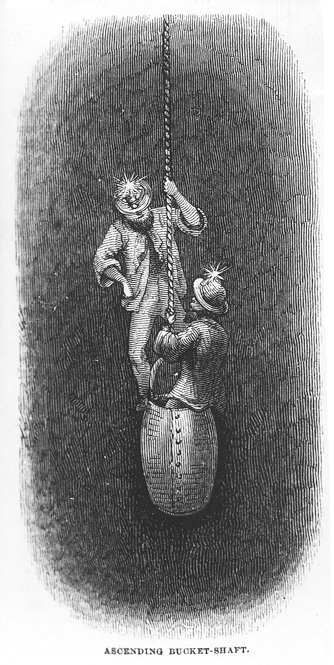 Miners riding an iron bucket, or kibble, up a shaft at Gold Hill, 1857, from their work site more than 300 feet underground.  (Courtesy, N. C. Historic Sites, Division of Archives and History.)

Miners descending by slippery ladder in a deep shaft at Gold Hill, 1857.  Pipe at right is for a steam-powered Cornish pump used to dewater the mine.  (Courtesy N.C. Historic Sites, Division of Archives and History.) 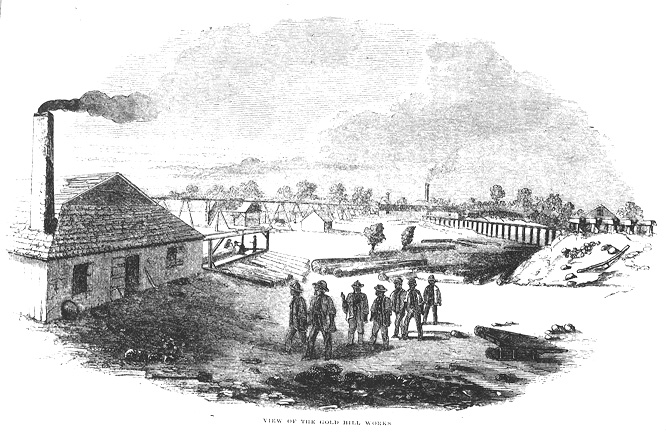 Surface structures at Gold Hill, 1857, including several millhouses, trestles for transporting water, and a stock of logs for the mine.  (Courtesy, N. C. Historic Sites, Division of Archives and History.)

Production continued sporadically in the late 1800s and early 1900s, but since that time gold output has been minor. The last significant production was from 1954 to 1963 as a byproduct of copper mining in the Blue Ridge.
In response to rising gold prices in the mid-1970s, interest was renewed in North Carolina gold. Prices rose to a high of $850 per ounce in 1980, but eventually became stable at around $350 to $400 per ounce from the late 1980s to the early 1990s. These higher gold prices and new methods of extracting gold from low-grade ores encouraged exploration for new deposits.  Although no new mines were opened in North Carolina, four gold mines were operated in South Carolina.  In the late 1990s, gold prices fell to below $300 per ounce and gold activity once again decreased.

Recreational gold panning remains a popular past time in North Carolina. It is difficult to find large amounts of gold, but the possibility of finding even a little "color" in a gold pan is hard to resist. The following information should answer some of the most commonly asked questions about gold.

HOW TO IDENTIFY GOLD

If you aren't sure it's gold, it probably isn't! Pyrite and yellow-colored mica are frequently mistaken for gold, but can easily be distinguished. Gold is very soft (2.5-3 on Mohs scale of hardness) and can be hammered into thin sheets without shattering. It is heavy (specific gravity of 19.3 when pure) and is insoluble in all acids except aqua regia (a mixture of hydrochloric and nitric acids).

Pyrite is harder than gold (6-6.5 on Mohs scale) and is brittle. When struck with a hammer, it shatters. It is also relatively light (specific gravity of 5.02). Pyrite frequently forms small cubes. Mica, on the other hand, is as soft as gold (hardness 2-2.5), but naturally occurs in thin sheets or flakes that can be split into individual sheets. It is lighter than gold (specific gravity of 2.76-3.1) and can be smeared out with a fingernail or a sharp object.

Most property in North Carolina is privately owned.  Individuals interested in non-commercial prospecting should obtain permission from the landowner prior to entering private property.  Most landowners are cooperative, but do not tolerate trespassers.

For serious mining, a lease agreement or purchase of mineral rights can be negotiated with the landowner.  Unless bought separately, mineral rights are normally retained by the landowner.  Property deeds are recorded in courthouses in the county seat of each county.  These records can be examined to determine land ownership.

Any mining must be carried out in accordance with the North Carolina Mining Act of 1971.  Anyone operating a mine that affects more than one acre of surface area must obtain a permit, post a bond, and develop a reclamation program.  Further information is available from the Land Quality Section of the Division of Land Resources, 1612 Mail Service Center, Raleigh, North Carolina 27699-1612, telephone (919) 707-9220.

All mining operations must comply with state and  federal  laws  pertaining  to  safety  and  health requirements.  Prior to opening a mine, operators should contact the Mine and Quarry Division of the North Carolina Department of Labor, 4 West Edenton Street, Raleigh, NC  27601, telephone (919) 807-2790 or (800) LABORNC (522-6762).

WHERE GOLD WAS MINED

Gold occurs in North Carolina in both lode (veins or mineralized zones) and placer (stream sediment or residual) deposits.  Although deposits were mined in both the Piedmont and Mountain regions, most of the early production was in the central Piedmont, particularly in the Carolina slate belt and in Mecklenburg County.  The slate belt includes the Gold Hill and Cid Mining districts and such mines as the Reed Mine in Cabarrus County, the Gold Hill Mine in Rowan County, and the Silver Hill Mine in Davidson County.  Mecklenburg County contained more mines and prospects than any other county in the state.  The most important mines in Mecklenburg County were the Capps, Rudisil and St. Catherine Mines.

Other counties in the slate belt where gold was mined include Guilford, Montgomery, Moore, Orange, Randolph, Stanly and Union.  In the western Piedmont, mines were located in Caldwell, Catawba, Davie, Gaston, Lincoln, Mecklenburg, McDowell, Polk, Rutherford, Wilkes and Yadkin Counties.

WHERE TO FIND GOLD

Most of the gold-exploration companies in North Carolina are looking for invisible gold associated with volcanic rocks.  Amateur prospectors are looking for the coarser gold found in streams and quartz veins.  Streams flowing through former gold-producing districts offer the best opportunities for panning. Although these streams were prospected many times, much of the fine gold was lost during earlier activities.  Because stream action and erosion redistributed the gold, it is still possible to find small amounts of gold in the stream sediments (placers).  It is also possible to find gold in quartz veins exposed at the surface of the ground. Although there are many quartz veins, it is rare to find one that contains gold.

The best place to find gold in streams is where they begin to widen or change in velocity, such as along the insides of bends or in slow-water areas below rapids.  Gold also tends to work its way to the bedrock and often accumulates in crevices, depressions, and potholes in rock underlying the streams.

Streams such as Little Buffalo Creek in Rowan and Cabarrus Counties, Dutch Buffalo Creek in Cabarrus County, Cabin Creek in Moore County, the Uwharrie River in Montgomery County and streams in the South Mountain area might be good places to try panning.  The Cotton Patch Mine near New London, Stanly County, is open to the public for panning.  For a fee, gold seekers can pan from sediments dug from a small creek.

Gold can also be panned at the Reed Gold Mine in Cabarrus County.  This mine was purchased by the state in 1972, and is now operated as a state historic site.  A portion of the underground workings has been restored and a visitor center offers exhibits illustrating the history of the mine.  Additional information is available from the Reed Gold Mine, 9621 Reed Mine Road, Stanfield, NC  28163, telephone (704) 721-GOLD(4653).  Visit the Reed Gold Mine official Internet site At Gold Hill, 20 miles north of Reed, there is a small historic park and trail that may be of interest. 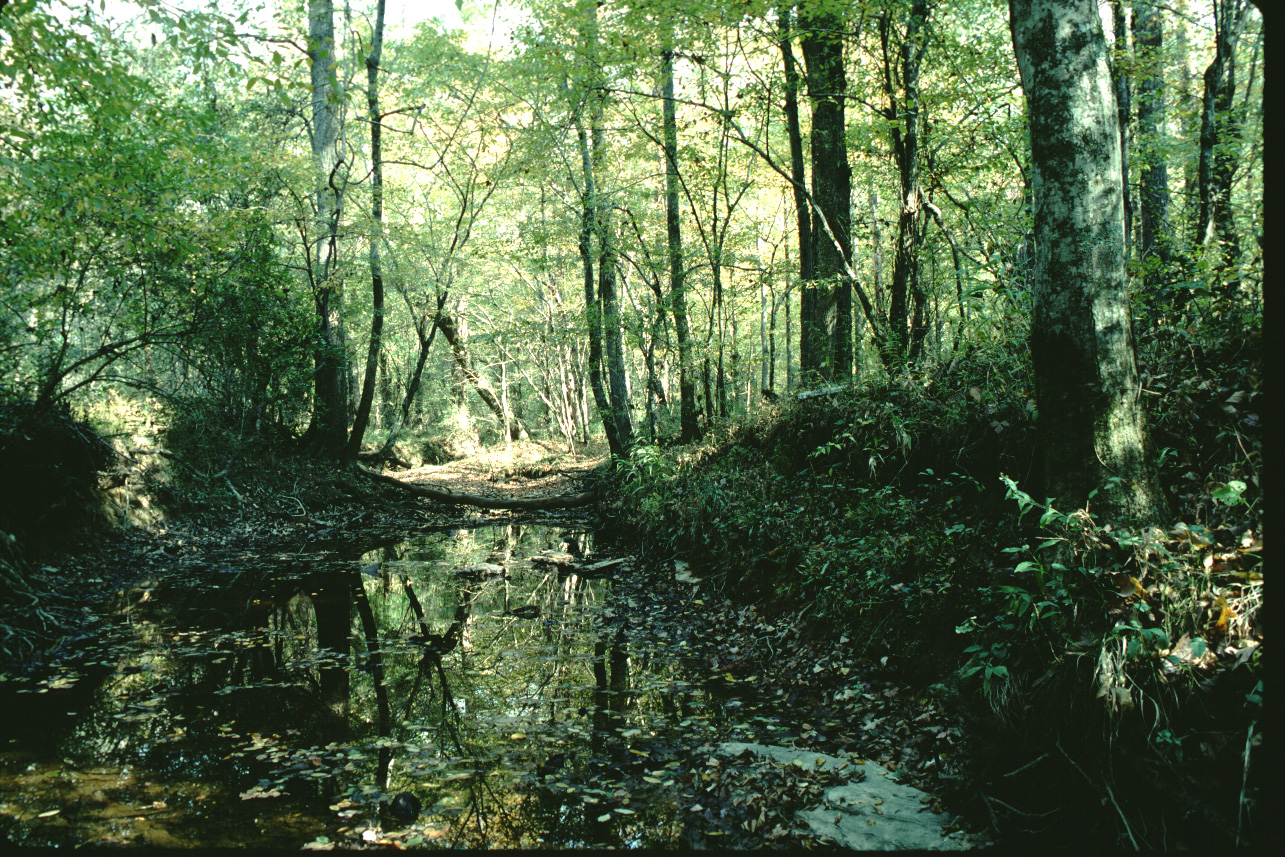 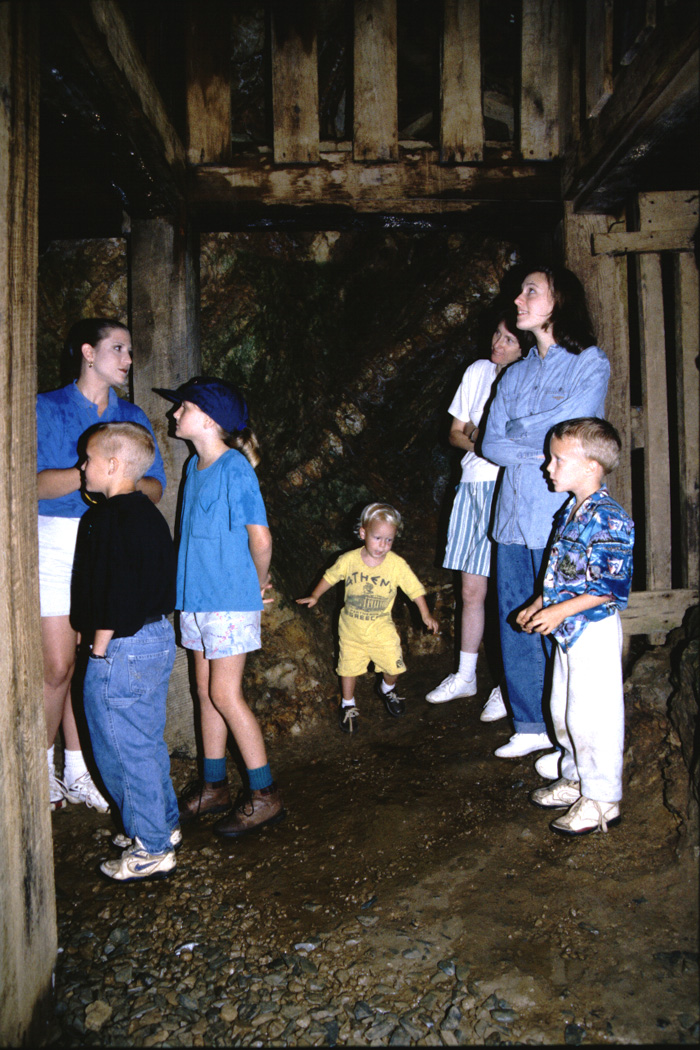 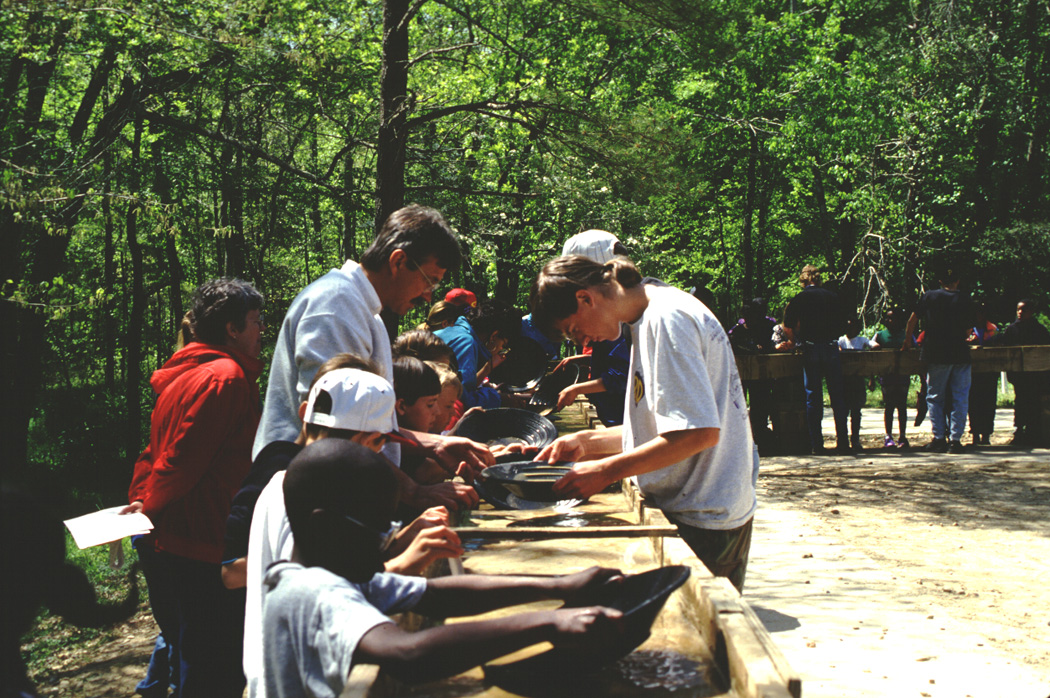 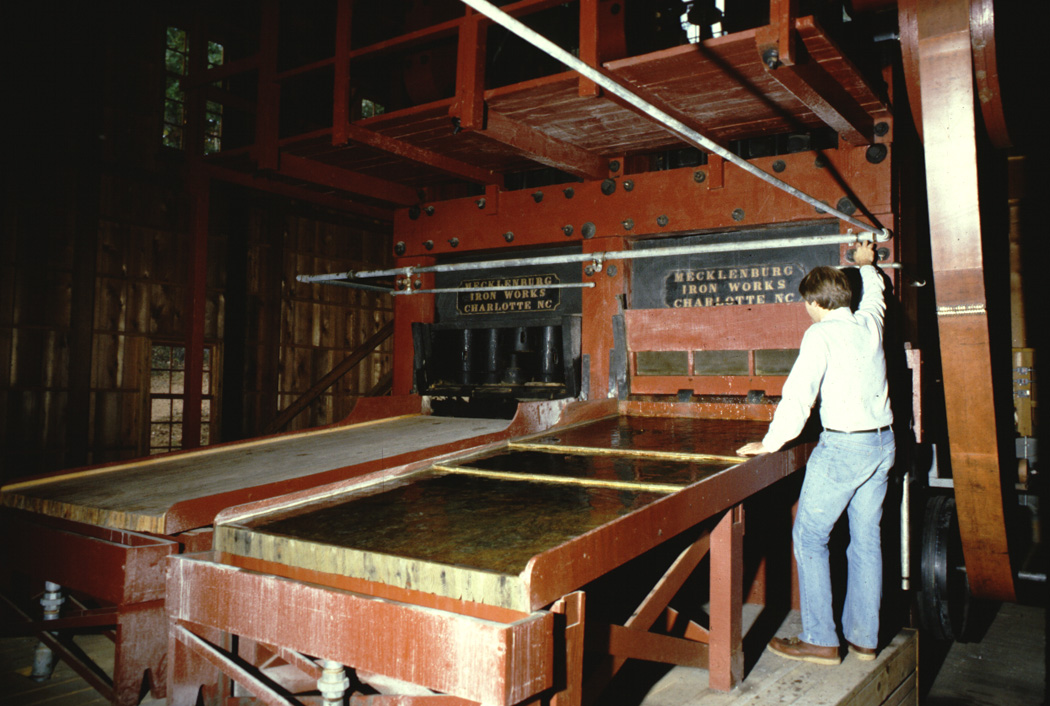 EQUIPMENT TO USE IN PANNING

The two basic tools needed for panning are the miner’s pan and a shovel.  Other equipment can be added depending upon how seriously intent one is at finding the hard-to-get-at gold.  A sturdy hook or spoon for gouging out crevices in bedrock, a magnet for removing magnetite from the heavy mineral concentrates, a magnifying glass, a geologist’s pick, and containers in which to keep the gold and concentrates are all helpful.

Additional equipment such as rockers, longtoms, sluices, or portable suction dredges can be used when larger volumes of material are worked.  Much of the equipment can be purchased from rock and mineral dealers.

WHERE TO SELL GOLD

Gold concentrates and nuggets can usually be sold to individual buyers as well as rock and mineral dealers.  Nuggets usually have a higher value as specimen samples and jewelry than at world market prices.  Gold obtained from lode deposits can also be sold as specimens or, when refining is necessary, the unrefined gold can be sold to a refinery.  Large lots are needed for shipping since handling costs often exceed the value of the gold.

Special thanks to Dr. Richard F. Knapp, Research Curator, North Carolina Historic Sites, for his invaluable help in putting together this page and for providing the images.