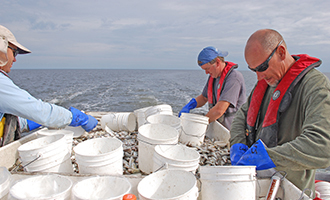 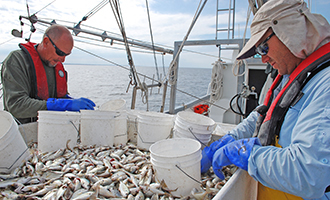 While fishing and swimming picks up in the summer, it is also the time of year when many Division of Marine Fisheries sampling programs start.

The division has many fishery independent sampling programs that use a variety of gears to monitor trends in the relative abundance of species, their habitat use, and to collect environmental information. Independent sampling programs are conducted by division staff and do not involve the commercial or recreational harvest of fish. They are designed to sample fish present in an area and fish at different size and ages. Independent sampling programs are not dependent on the skill of the sampler and can be repeated following a set protocol. The value of a sampling program increases with time because it allows biologists and stock assessment scientists to look at a species’ abundance through time. Fishery independent data allow managers to have a more complete picture to understand stock condition and to evaluate management measures and the likely causes of stock changes.

The longest ongoing survey completed by the division is the Juvenile Anadromous Survey (Program 100) in the Albemarle Sound and its tributaries. The term “anadromous” refers to fish that spend most of their adult life in the ocean but return each year to freshwater rivers to spawn. The juvenile fish stay in the Albemarle Sound and tributaries for a year or more before migrating back out to the ocean. This survey was designed to determine the relative abundance, growth, and distribution of river herring and striped bass. The fixed-station survey (meaning the same stations are sampled the same number of times throughout the year, every year) began in 1971 and uses a 60-foot bag seine and an 18-foot head rope bottom trawl. Some of the current stations were established by Dr. William Hassler of N. C. State University in 1955 to monitor juvenile striped bass abundance. The division took over sampling these same stations in the 1980s when Dr. Hassler retired, making it the longest continuous striped bass survey on the East Coast. The survey also collects habitat and water quality information. The data collected through the survey has been used in stock assessments for striped bass, menhaden, southern flounder, and blue crab, and for numerous graduate school dissertations. In 2016, seine and trawl stations were added in the Tar/Pamlico, Neuse, and Cape Fear rivers to monitor juvenile striped bass abundance and their habitat.

Another long-term division survey, and the only statewide trawl survey, is the fixed-station Estuarine Trawl Survey (Program 120), which began in 1978. This sampling occurs each year in May and June. A set of 105 stations in shallow water areas from Roanoke Sound to Shallotte River are towed for one minute using a 10.5-foot head rope trawl. This survey provides a juvenile index of abundance, identifies critical habitat for key species, and provides information to evaluate coastal development and other factors that may influence habitat use over time. This survey has been used in stock assessments for spotted seatrout, weakfish, spot, Atlantic croaker, blue crab, southern flounder and brown shrimp abundance.

A trawl survey that has been ongoing since 1987 is the Pamlico Sound Survey (Program 195), with sampling occurring in June and September. It is a stratified-random survey in the deeper water areas of Pamlico Sound, including the Pamlico, Neuse, and Pungo rivers. The term “stratified-random” means the survey has lots of stations from which a few are chosen at random to be sampled, and the survey covers different “strata” or habitat types within the state. Two 30-foot head rope mongoose trawls with a one and one-half stretched mesh tail bag are towed for 20 minutes at 2.5 knots. The sampling collects environmental information, counts of all species collected, lengths, and additional data on the age and diet of the species it encounters. This survey produces annual juvenile indexes for many species and identifies the general ecological functions in support of Strategic Habitat Areas. This survey is also a component of a coastwide program called the Southeast Area Monitoring and Assessment Program (SEAMAP) that disseminates fishery-independent data and information from the southeastern states from Florida through North Carolina (see www.seamap.org). This data, along with comparable data from the other states, have been used in stock assessments for blue crab, Atlantic croaker, spot, weakfish, and flounders and to answer requests from outside investigators, such as academia, non-governmental organizations, and other interested citizens.

Gill nets are another gear type used in some of the division’s fishery independent sampling programs to collect information on sub-adult and adult fish. The Striped Bass Independent Gill Net Survey (Program 135) is a random-stratified multi-mesh monofilament gill net survey established in the Albemarle and Croatan sounds in 1990 to monitor the Albemarle/Roanoke striped bass population. The fishing year is divided into two segments: a fall/winter segment from November through February to monitor the overwintering striped bass population in Albemarle and Croatan sounds; and a spring segment from March through May in the western Albemarle Sound to monitor the adult portion of the stock on its yearly migration up the Roanoke River to the spawning grounds near Weldon. Gill nets with a stretched mesh length ranging from 2 ½ inches to 10 inches are used each sampling trip to ensure all sizes of fish in the population are sampled and to understand their length, age, growth, movement (tagging), sex, diet, and genetics across the population. Data from this survey has been used in striped bass, southern flounder, river herring, American shad, and blue crab stock assessments.

Sampling is also conducted in other areas of the state using multiple mesh gill nets (Program 915). The program first began in 2001 in Pamlico Sound and subsequently expanded to the tributary rivers of Pamlico Sound (Pamlico, Pungo, Neuse rivers) in 2003, in the Cape Fear and New Rivers in 2008. Most recently it expanded to Bogue and Core sounds and the White Oak and Newport rivers in 2018. Sampling is randomly stratified by area and depth and occurs all months except January. All species are measured and weighed and environmental data are collected on each trip. Biological information such as age and movement (tagging) on target species are also derived from this program. This program provides age-specific relative abundance indexes for key estuarine species and a tuning index in stock assessments for southern flounder, red drum, weakfish, spotted seatrout, and striped bass. This survey gives baseline information to understand changes in stock abundance resulting from regulatory or environmental changes and data to evaluate habitat use patterns for many species.