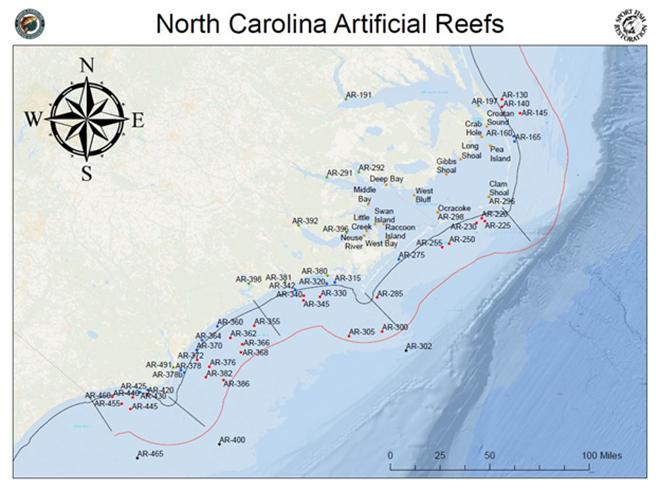 The Division of Marine Fisheries has been involved with the construction, permitting and monitoring of artificial reefs since the early 1970s. In 1985, the General Assembly authorized the Marine Fisheries Commission to establish standards and adopt regulations for the siting and use of the reefs. The reef program’s primary objective is to create a habitat that increases recreational fishing and diving opportunities.

Today, North Carolina has one of the most active artificial reef programs in the country, with 43 ocean reefs, ranging from one-half to 38 miles from shore, and 25 estuarine reefs, including 15 oyster sanctuaries. Sunken ships, bridge debris, concrete pipes and other materials create hotspots of marine life for anglers and divers across the North Carolina coast.

The reef program partners with several nonprofit organizations to coordinate regional enhancement projects. This often involves hiring marine contractors, securing staging areas and heading offshore to delineate the location for materials on reef sites. Once the project is complete, reef staff conduct multibeam and sidescan surveys on the new enhancements, which are added to an Interactive Reef Guide web application.

Some recent projects include:

In mid-August, construction began on AR-380, a new reef in Bogue Sound near Spooner’s Creek. AR-380 was constructed using 96 bay balls, which were loaded from the division dock on the R/V Shell Point. These reef balls are approximately 2 feet high, 3 feet wide and weigh around 900 pounds. This reef will create approximately one acre of new habitat in the sound, in a location convenient to anglers in smaller vessels. These reef balls are designed to provide the greatest amount of surface area for their size, as well as protection for small fish, attracting the larger predators targeted by fisherman.

Construction of both AR-380 and AR-381 were funded by the reef program’s federal Sport Fish Restoration grant.