Jason Parker is Marine Patrol Officer of the Year 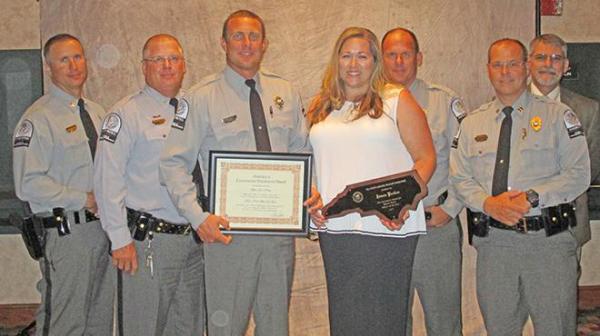 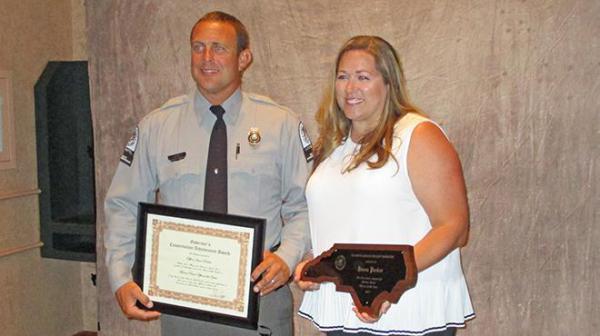 Whether it’s investigating a fisheries violation, trying out new technologies or working with Marine Fisheries education exhibits, Jason Parker excels at his job as a N.C. Marine Patrol officer.

Parker was chosen as the 2017 Marine Fisheries Enforcement Officer of the Year and received the award Sept. 8 at the 55th Annual Governor’s Conservation Achievement Awards Banquet in Cary.

Parker joined the Marine Patrol in 2010, and he works in the Hampstead and Topsail areas of southeastern North Carolina. His primary duties include inspecting size and creel limits, enforcing gear restrictions, monitoring license holder activities and checking for boating safety. In addition to his daily activities, Parker has extensive experience in investigating mechanical clamming operations, shrimping, shell fishing and flounder gigging cases.

In one notable case, Parker used a combination of planning, skill and patience to apprehend two subjects taking clams from polluted waters and arrest them on felony charges. Parker, working with another officer at night, used a thermal imaging camera to witness a violation and quickly assess the scene. The subjects fled at the sight of a vessel approaching, but Parker apprehended them. This is one of many cases that demonstrates Officer Parker’s ability to properly utilize his resources and knowledge of his surroundings to catch violations and apprehend offenders.

Parker also leads the way in incorporating technology in Marine Patrol duties. He was one of the first users of the Collector app which allows officers to track and observe gill net activities on their mobile devices to streamline data collection. More recently, he become one of the few officers to beta test Workforce, a Geographic Information Systems application that acts as a new dispatch platform. This application tracks the locations of officers allowing for more efficient dispatch to any call or complaint made to the division. His willingness to employ new technological advances has helped to make the Marine Patrol more efficient and productive.

Parker has made his dedication to the division clear time and again. If he is not exceeding in his day to day activities, he is excelling elsewhere. He has put in countless hours helping to complete background investigations for new hire candidates, producing detailed and reliable information for the captain, major and colonel to evaluate.

Officer Parker’s drive to excel in his position remains clear as he is always interested in and willing to attend a variety of training opportunities. With his completion of the Field Officer Training and Firearms Instructor School, Marine Patrol relies heavily on his expertise to maintain the skills and training of officers statewide. Due to his Rapid Deployment Training, he has instructed interactive and demonstrative active-shooter exercises, providing all officers with invaluable skills to protect themselves and the public. He has assisted other instructors with training in a diverse range of subjects, including Cold Water Training for all districts of Marine Patrol. His willingness to aid all districts within Marine Patrol has been instrumental in making its training efforts successful.

Beyond his contributions to improving the skills of Marine Patrol officers, Officer Parker has contributed much of his time to participating in community outreach events – he has volunteered at the Division of Marine Fisheries’ N.C. State Fair exhibit in Raleigh where he had one-on-one contact and provided educational materials about the division to people of all ages; he has shown his vehicle to children at Touch-A-Truck events; he has helped with the Marine Patrol Education Team’s exhibit at the Wilmington Boat Show. Parker sees the value in community participation as a law enforcement officer, and he will sacrifice his own time to provide positive educational experiences for children and families throughout North Carolina.

When not on duty with Marine Patrol, Officer Parker is an incredible family man dedicated to enjoying the outdoors with his wife and children whenever he can. His love of the outdoors shines through in his work as he patrols our waters while upholding excellent personal core values.

The North Carolina Wildlife Federation presents its Governor’s Conservation Achievement Awards annually to individuals, associations, businesses and others who have exhibited unwavering commitment to conservation in North Carolina.