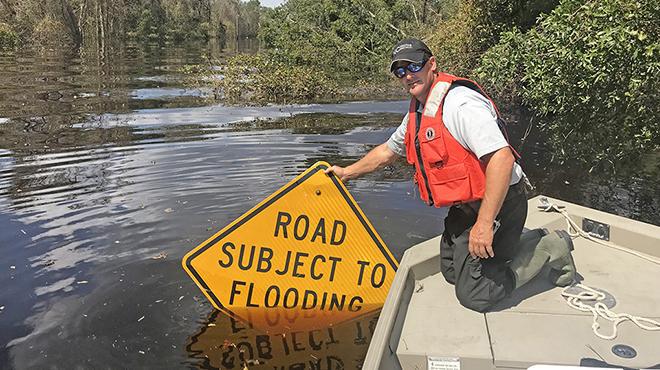 You know their names. You see them, sometimes daily, on the water and at fish houses. They help your gear meet state regulations, they check your ice boxes – and they help with search and rescues. When Hurricane Florence made landfall, the North Carolina Marine Patrol became a life-saving force.

Because of their training and knowledge of the area, and their shallow-water boats, Marine Patrol officers were uniquely qualified to help during Hurricane Florence. They put their skills to work rescuing more than 65 people from rising floodwaters and conducting wellness checks throughout several of the hardest-hit communities.

“We pulled up to people’s eaves to get some people,” said Marine Patrol Col. Dean Nelson, about finding men and women standing desperately on the roofs of their homes to escape the rising water. “Others just had trouble getting out of their neighborhoods because they were elderly or because they had four feet of water on their road.”
In Hyde County, the Marine Patrol rescued four people around Slocum Creek. In Pamlico County they rescued a diabetic man, assisting in his evacuation by air, and while in Beaufort County, the Marine Patrol rescued a family of five and their two dogs.

In Carteret County, 20 were rescued, in Pender and Onslow another 30 to 40 were saved, and in Brunswick, Patrol Officers rescued a man from a sailboat that had been disabled for two days near Oak Island. Patrol Officers also, over a week’s time, delivered 8,750 hot meals prepared by volunteer groups to the towns of Boiling Springs Lakes and Ash. The first meal deliveries were conducted by boat until the waters receded. Officers relayed power workers to a substation located near the Cape Fear River to start pumps to prevent the station from going under water.

Marine Patrol officers were also called upon to assist local law enforcement agencies with security and to provide flights over hurricane-damaged areas for state officials. Their service during Florence was a reminder that in addition to their day-to-day activities, the Marine Patrol is often one of North Carolina’s first responders during times of natural disaster.