Crustaceans are a group of animals whose skeletons are on the outside of their bodies. They live in saltwater and breathe through gills, just like fish. They have many pairs of legs, and their bodies are jointed, like a human’s elbows or knees. Crustaceans use feelers for touching, feeling and smelling.

Crabs, shrimp, lobsters and barnacles are all crustaceans. Some crustaceans can swim, like crabs and shrimp. Some can only scuttle along the ocean floor, like the lobster. And the barnacle sticks to a hard spot and never moves at all.

The hermit crab is also a crustacean, but he does not grow his own shell. He has to find empty shells of other animals to move into when he gets too big for his shell. 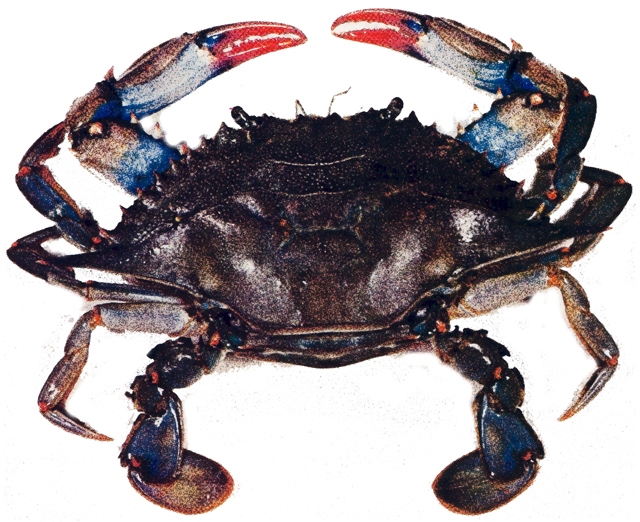 The blue crab is common to all North Carolina coastal waters, but the largest populations tend to live in the Albemarle and Pamlico sounds. In 2011, over 30 million pounds of blue crabs were harvested commercially, with a dockside value of $21 million.

In order to grow, a blue crab must shed its shell and form a new one. As crabs shed, they emerge from their old shells with a very thin, soft shell which hardens after several days. These softshell crabs are delicacies that are eagerly awaited by crab lovers each season. The shedding process is repeated up to 25 times during a crab’s life span, which seldom exceeds two to three years. When environmental conditions are favorable, large numbers of crabs can be produced from a relatively small spawning stock. Females can spawn twice in their life-cycle and release up to two million eggs at a time.

If a crab loses a leg or claw, it is able to regenerate, or grow a new limb to replace the one lost. In addition, the crab possesses the power to throw off limbs voluntarily. If a crab is seized and held by a leg, it may release that leg and escape. The leg is regenerated during the next shedding cycle.

A mature male crab is called a "jimmy" and is easily recognized by the brilliant blue shading on his shell and claws. Female crabs are called "sooks" (adult) or "she-crabs" (immature) and can be distinguished by the rounded aprons on their underside and red tips on their claws. The "sponge crab" is a female that has an egg mass on her abdomen.

To manage the blue crab resource, there are regulations to govern both recreational and commercial crabbers. For more information on these rules, contact the North Carolina Division of Marine Fisheries at 800-682-2632 or 252-726-7021.

North Carolina has three main types of shrimp: brown, pink and white. Shrimp are estuarine dependent — that means they live in marshes and estuaries when they are very young because it’s safe and there is plenty of food. They grow very quickly, doubling in size every few weeks. When shrimp are almost full grown, they swim out of the estuaries into the ocean.

Shrimp are considered an annual crop because they do not live very long — only about two years. The amount of shrimp we have from year to year varies, depending on the weather. If we have a very cold winter, then we will have a small shrimp population the following spring. If we have lots of rain, then the shrimp will move out into the ocean before they are fully grown.

Shrimp are the second most economically important fishery in North Carolina. In 2004, Tar Heel fishermen caught 4.9 million pounds of shrimp, worth $9 million. Most of these shrimp were caught with trawl nets in our sounds and rivers.

Brown shrimp are North Carolina’s most abundant shrimp species and support a major commercial fishery along our central and southern coastline. Brown shrimp are spawned in the ocean and carried by tides and wind-driven currents into our estuaries in late winter and early spring.

Most brown shrimp are caught in the summer and have a maximum life span of 18 months. They can grow as large as nine inches. Brown shrimp account for 67% of North Carolina’s shrimp landings.

White shrimp, or green tails, are the second-most abundant species in North Carolina. White shrimp are spawned in the ocean from March to November and are carried by tides and wind-driven currents into our estuaries.

White shrimp are harvested primarily in the fall. These shrimp have a maximum life span of 24 months and they can grow as large as eight inches. White shrimp account for 28% of North Carolina’s shrimp landings.

Pink shrimp, or spotted shrimp, are spawned in the ocean April through July and carried by tides and wind-driven currents into our estuaries where they overwinter.

Pink shrimp are harvested in the spring and the fall, and have a maximum life span of 24 months. They can grow as large as 11 inches. Pink shrimp account for 5% of North Carolina’s shrimp landings.