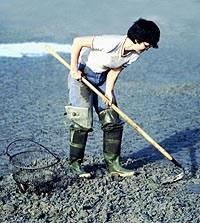 Clams are bivalved mollusks that can live up to 35 years and grow up to five inches in diameter; however, most N.C. clams are harvested when they are two years old at the minimum harvest size of one inch thick.

The status of the clam fishery in N.C. is "unknown". Landings have remained fairly steady over the years, but it is felt increased fishing pressure, poor water quality, and habitat loss have impacted this fishery. More detailed studies need to be conducted to accurately determine the status of the hard clam.

Clams are harvested with rakes or by hand in intertidal areas and shallow water along much of coastal N.C.. They are also caught with tongs and bull rakes in deeper water and by dredges and "kick boats" in Onslow and Carteret counties. 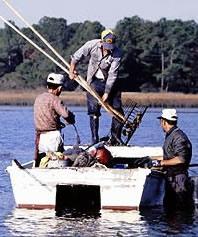 Oysters are bivalve mollusks that can live up to 40 years and grow up to eight inches; however, most N.C. oysters are harvested at three years of age, at the

minimum harvest size of three inches. In the early stages of an oyster’s life, it is carried about by currents. As it matures, the oyster sinks to the bottom. To survive, the oyster must land on a hard surface. That is why they are found growing together in clumps or rocks.

The status of the oyster fishery in N.C. is "concern". Increased fishing pressure and stock declines caused by diseases, poor water quality and habitat loss, have led to the collapse of this once prosperous fishery.

Oysters are harvested from October to March with tongs, rakes, or by hand, in intertidal areas and shallow water along coastal N.C.. They are also caught by dredges in parts of the Pamlico Sound.

Bay scallops are bivalve mollusks that only live up to 26 months and grow to the length of four inches. In the early stages of a scallop’s life, it attaches to the leaves and stems of sea grass. As it matures, it sinks to the bottom where it continues to grow. Environmental factors, such as temperature, rainfall, and sea grass health play a critical part in scallop abundance and yearly landings can widely vary.

The status of the bay scallop fishery in N.C. is "depleted."  Bay scallops never completely recovered from a red tide in 1987 and several hurricanes in the 1990s so that they are now more susceptible to environmental events, natural predation from cownose rays and fishing effort. In recent years, harvest has decreased to essentially no landings. Under a Bay Scallop Fishery Management Plan, the Division of Marine Fisheries has closed both commercial and recreational bay scallop season indefinitely to allow the population to increase.