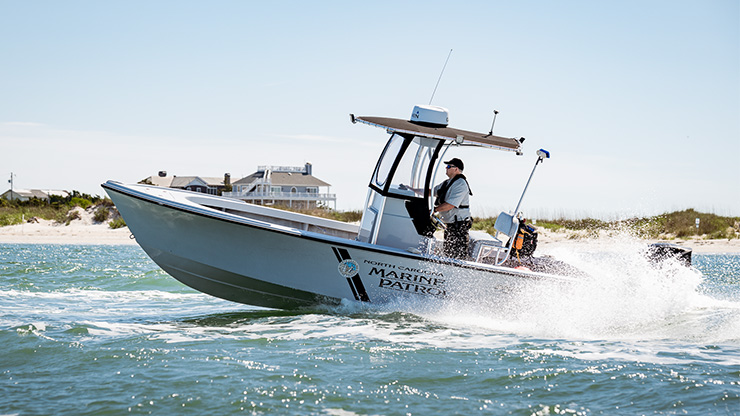 The North Carolina Marine Patrol can trace its roots back as early as 1822, when the North Carolina General Assembly enacted legislation to impose gear restrictions on oyster harvest. Throughout the years the role of the patrol has greatly expanded, encompassing the commercial harvest of finfish and shellfish, and then broadening to include both commercial and recreational fisheries.

Today, the mission of the Marine Patrol is to ensure sustainable marine and estuarine fisheries for the benefit of the people of North Carolina. Their jurisdiction includes all coastal waters, extends to 3 miles offshore, and ranges to 200 miles offshore for some federally regulated species. Officers monitor 2.5 million acres of water and over 4,000 miles of coastline.

North Carolina has an abundance of fish and along with those fish come a lot of fishermen. Latest estimates show that approximately 4,000 commercial fishermen, 9,000 RCGL holders, and 2 million recreational anglers enjoy the bounty of the state’s marine resources. It is the responsibility of the Marine Patrol to make sure fishermen comply with general statutes and rules that are developed to protect and regulate the harvest of the state’s fisheries.

Currently, the Marine Patrol has 56 officers that work in three law enforcement districts along the coast. In addition to checking commercial and recreational fishermen, officers patrol waterways, piers, and beaches in coastal areas. They also inspect seafood houses, vehicles transporting seafood, and restaurants all over the state to make sure everyone is complying with fisheries rules. Officers use a variety of different size boats, aircraft and patrol vehicles to accomplish these tasks.

Learn more about the N.C. Marine Patrol by viewing the video below.

Go to Other Department of Environmental Quality Enforcement Pages

All requests for information regarding law enforcement position openings, experience and training requirements, etc. should be directed to DMF Human Resources.
Email: Pam.Winslow@ncdenr.gov
Phone: 800-682-2632 or 252-726-7021 or visit the NC OSHR website.