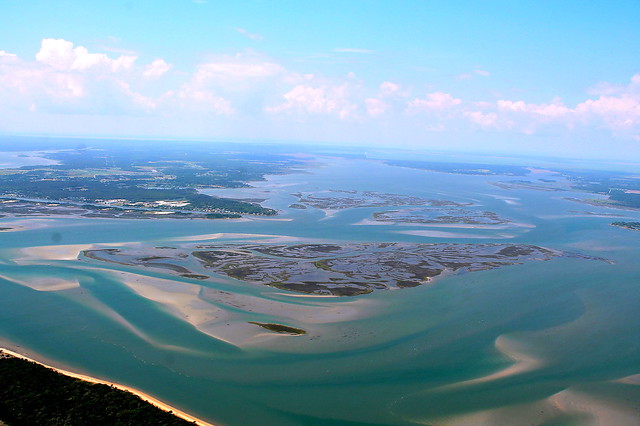 The Rachel Carson Reserve is located between the mouths of the Newport and North Rivers and directly across Taylor’s Creek from the historic town of Beaufort in Carteret County. The main part of the site, just south of Beaufort, is a complex of islands which includes Carrot Island, Town Marsh, Bird Shoal, and Horse Island. These islands are more than three miles long and less than a mile wide. Middle Marsh, separated from the rest of the site by the North River Channel, is almost two miles long and less than a mile wide. The entire Rachel Carson component is 2,315 acres. Acquisition of the area was completed in 1985, with the addition of Middle Marsh in 1989. This site is also a Dedicated Nature Preserve, authorized by G.S. 143B-135.250.

More than 200 species of birds have been observed at the site, which is located within the Atlantic Migratory Flyway. Many species are considered rare or decreasing in number. The site is an important feeding area for Wilson’s plovers in the summer and piping plovers in the winter. The shrub thicket of Middle Marsh supports an egret and heron rookery. A diverse array of mammals inhabits the island including river otter, gray fox, marsh rabbit, raccoon, and a herd of feral horses. Atlantic bottlenose dolphins, diamondback terrapins, sea turtles, and many species of fish and invertebrates are found in the estuarine waters surrounding the site.

Horses were brought to the site by a local citizen in the 1940s and eventually became wild or “feral,” thus they are considered non-native inhabitants of the islands. The horses are valued by locals and tourists alike as a cultural resource and symbol of wildness and freedom. A horse population boom and then die-off during the mid-1980s resulted in degraded habitats and unhealthy horses. To maintain the health of both the horses and the island ecosystem, select female horses are given birth control, through a remote injection, once per year. The horses subsist primarily on saltmarsh cordgrass and they dig for fresh water. Please help protect the horses and your safety by maintaining a distance of at least 50 feet away (the size of a large bus). A much larger distance is recommended for viewing the horses’ natural behaviors and protecting them from disturbance.

The Rachel Carson site is only accessible by private boat or passenger ferry. Motorboats can be launched from the N.C. Wildlife Resources Commission boating access area located at 2370 Lennoxville Road in Beaufort. Canoes and kayaks can be launched from designated areas along the Beaufort waterfront. Ferry services are located along the Beaufort waterfront.

Visitors usually access the site near the trailhead at the west end of Town Marsh, the Carrot Island boardwalk, or Bird Shoal. Special habitat areas, such as the horses’ watering holes and the shorebird nesting sites, are off-limits to visitors. Learn more about visitation guidelines and rules.

Public field trips to the Rachel Carson Reserve occur on Tuesdays and Thursdays from 8:30-10: 30 am during June, July and August. All programs are open and free to the public but reservations are required as boat space is limited.

**No hunting allowed on Carrot Island effective July 2019, when the east end of Carrot Island was annexed into Beaufort Town limits.**

Hunting is still allowed in Middle Marshes, although lead shot cannot be used. Hunters must follow the rules and regulations of N.C. Wildlife Resources Commission and the N.C. Coastal Reserve. Hunters are responsible for knowing and abiding by all hunting regulations and knowing Reserve boundaries.

Hunters are required to have a valid state hunting license from the N.C. Wildlife Resources Commission.