North Carolina has several different types of rock and soil that can produce acid when exposed to air and water. While releases of acid are easily controlled, acidic water can be harmful to plants and animals if left unchecked. Also, these rock types may be more susceptible to landslides. The North Carolina Department of Transportation pays close attention to road construction in areas of acid-producing rock. Acid-producing rocks occur in scattered areas throughout North Carolina.

Areas of bedrock with acid-producing potential are common in the Blue Ridge Mountains of Western North Carolina. Much of the rock contains trace amounts of naturally-occurring iron sulfide minerals, such as pyrite (fool’s gold), usually occurring in concentrations below what’s necessary to produce harmful environmental impacts when exposed. Other acid-producing rocks, primarily those among the metamorphosed sedimentary rocks of the western Blue Ridge, can contain sulfide minerals in concentrations sufficient enough to warrant mitigation measures when encountered during engineering projects. 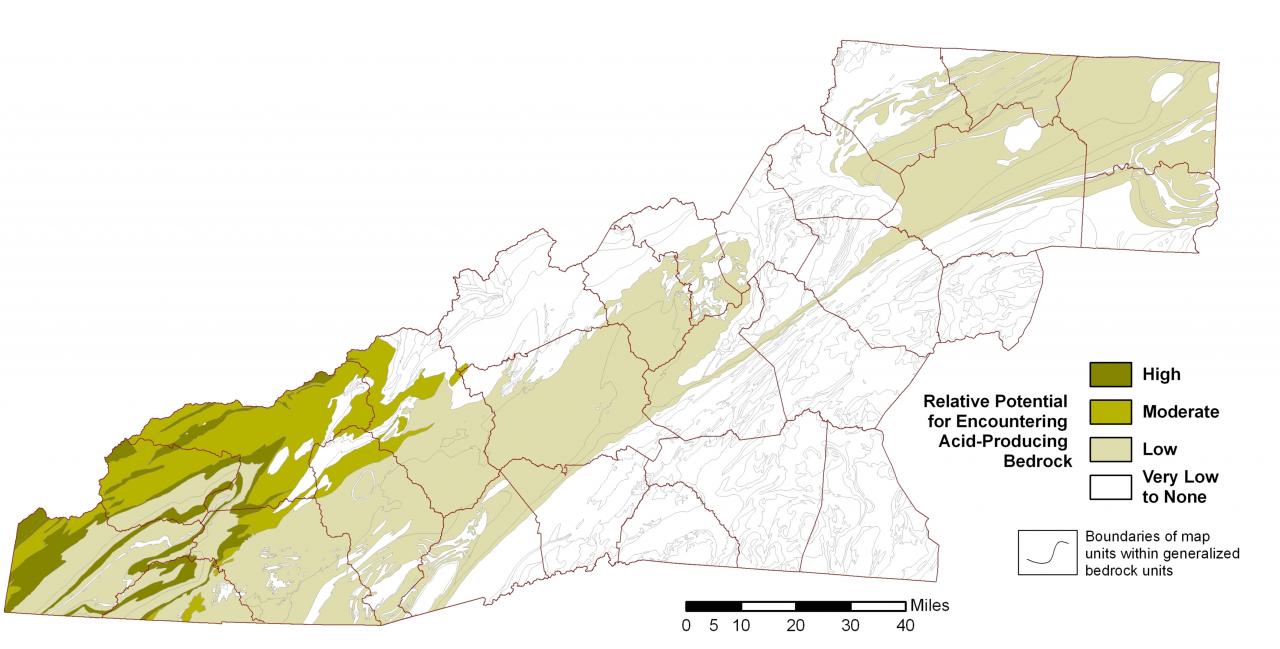 When exposed, oxidation and hydrolysis of the sulfide minerals can produce the damaging sulfuric acid with pHs as low as 2.5, and can weather the surrounding rock at accelerated rates. Excavations into unweathered sulfide-rich rock exposes areas containing the constituent minerals and then increases the potential for acid production, but is typically not a concern unless significant amounts of unweathered rock becomes exposed. Produced acid can also serve as runoff throughout rock fissures and slopes that further exacerbates rock weathering, thus leading to rockslides and surface instabilities.

When acidic runoff enters streams, sudden decreases in pH may occur and can degrade water quality, causing significant mortalities among acid-intolerant aquatic organisms, such as during the 1963 reconstruction of U.S. Highway 441 in the Great Smoky Mountains National Park. Acidic runoff is usually greatest shortly after road construction, but can continue at decreased levels years after construction. Mine waste and tailings from some abandoned mines can also produce damaging acid runoff, such as with the Ore Knob Mine in Ashe County.

Similarly, acid-producing rocks can adversely affect the stability of slopes, particularly if untreated material is used in the construction of embankments. Acid-producing rock was a contributing factor in this 2006 rockslide on the Blue Ridge Parkway, as was the case in the slope failures of Swain County in 2003 and Haywood County in 2006, or the road cuts contributing to rockslides on the Blue Ridge Parkway in 1999 and 2006. To avoid similar damage, the presence of significant amounts of acid-producing rock was a consideration in evaluating alternatives for the North Shore Road extension in the Great Smoky Mountains National Park in Swain County. Given these many concerns, well-established, standard engineering practices have been developed to isolate or neutralize acid-producing rock when encountered in construction. 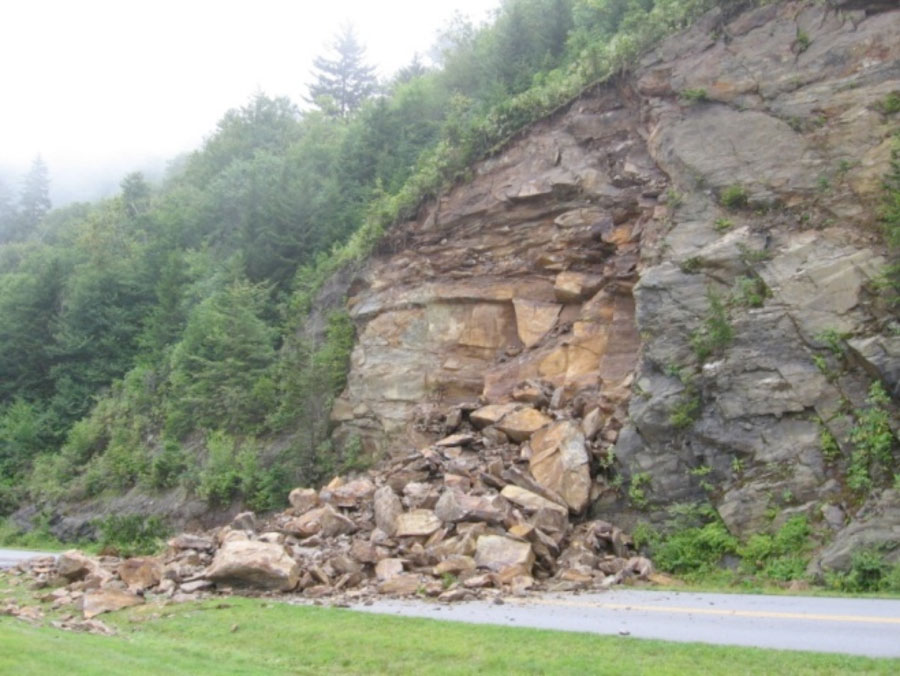 Figure: Acid-producing rock was a contributing factor in this 2006 rockslide on the Blue Ridge Parkway.