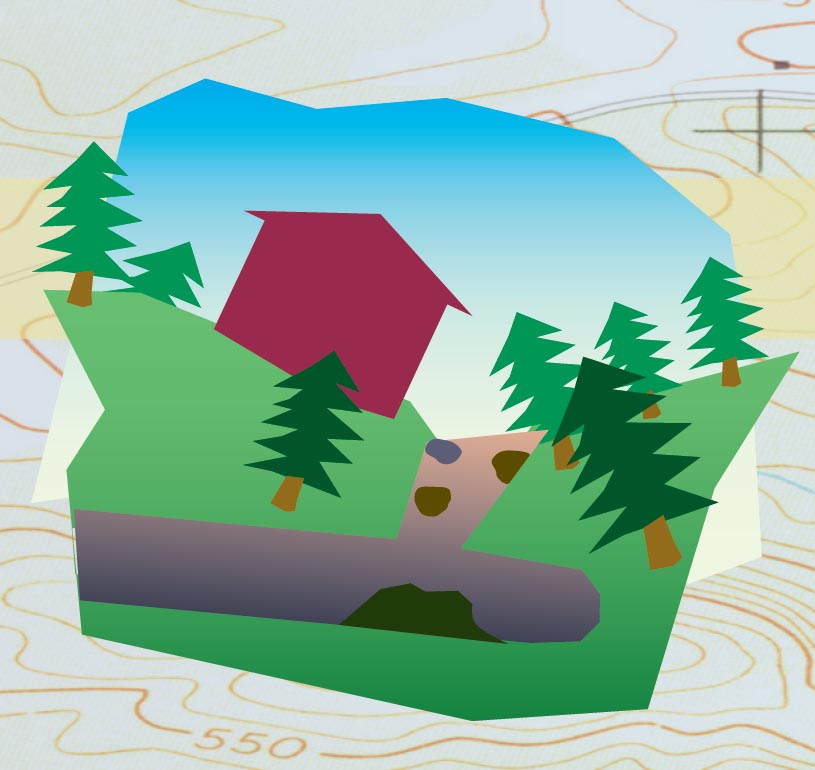 North Carolina has a rich history of mining for gold and other precious metals.  Many of these historic locations have underground workings or locations with poor compaction or fill.  Encountering historic workings during the construction process or after construction may have serious effects on the project.  Geologic maps and other geologic data can provide information on past land-use in historic mining areas of the State.

Most underground mining in our state ended more than 100 years ago. There are literally hundreds of abandoned historic mines in North Carolina. We know where a lot of these abandoned historic mines are, but not all, and that can be a problem. The North Carolina Mining Act of 1971 requires mining operations (below and above ground) to acquire permits so there is now a record of where modern mining operations occur.

Another problem is that when you look at the surface of the ground, it is almost impossible to tell exactly in what direction and how deep mine workings go. Tunnels and shafts can extend hundreds of feet underground. Even if we know where an old mine starts, we do not always know where it goes underground. Old maps may be inaccurate and old mines may be inaccessible or too dangerous to enter. Modern technology, such as ground-penetrating radar, may be able to detect the extent of the mine workings. If these workings collapse underground, the land surface could sink, cracking building foundations, or the land could fall into the caved-in area forming a “sinkhole” or collapse hole.

Abandoned mine collapses are relatively rare, but with urban development spreading quickly across our state, it is important to know the locations of old mines. Building above an abandoned mine can be dangerous if the mine is weak or near the ground surface. On Feb. 18, 2000, a collapse hole developed in the front yard of a house in Cabarrus County (Figure 21). 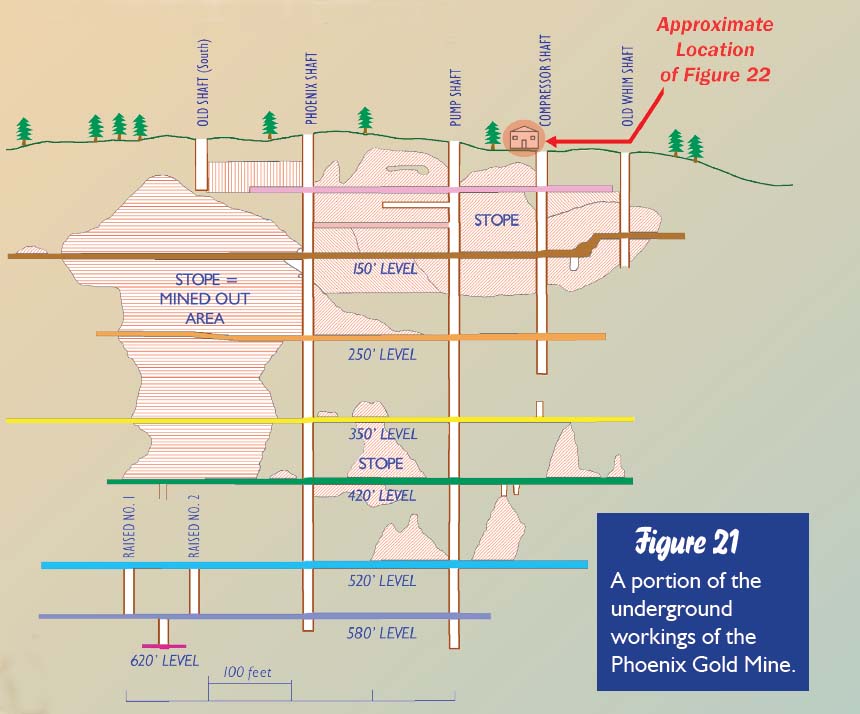 The hole was above the old Phoenix Gold Mine, which closed in 1906. In the 1980s a suburban golf course community was built over the mine. Fortunately, the house was not built directly over the part of the mine that collapsed. The hole was only about 12 feet deep but the mine, according to historic records, went down much further (Figure 22).

In 1991, construction activities opened the entrance to a graphite mine on private property in Raleigh. The owner of the property pumped out groundwater from a portion of the mine (fig. 23). The structural timbers in the mine were dated to the late 1800s, indicating when the adit, a horizontal tunnel, was built. The owner was not aware of any underground mine workings on his property. Mining has been an important part of our state’s economic development. As we have seen with the Phoenix Mine and graphite mine, we need to pay attention to where the past meets the present. If you suspect or find an entrance to an underground mine, DO NOT ENTER! Contact the North Carolina Geological Survey or local emergency management officials. 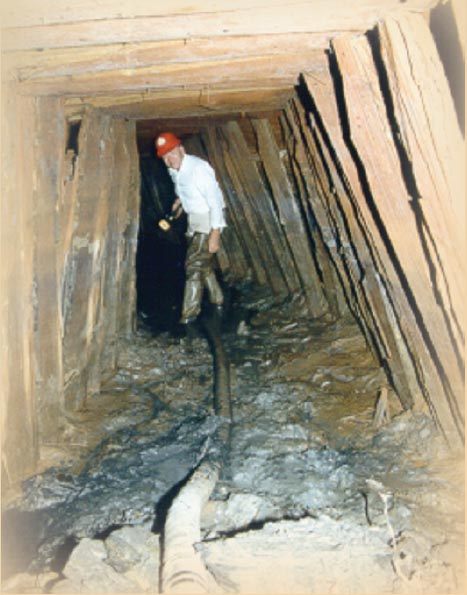 Figure 23: Homeowner is standing in a graphite mine discovered in 1991 on his property in Raleigh, NC. (Photograph supplied by A.C. Barefoot)

Before development of an area, for any purpose, a check of abandoned mine locations would be helpful for responsible development. This check would aid in avoiding future building damage and human injury because of sinking or collapse of the land above these mines. Most underground mines occur in the central Piedmont of North Carolina in a broad zone stretching between Charlotte and Greensboro.

How this affects you:

Just as with sinkholes, abandoned mines may become more of an issue with increasing population and development. Since most underground mining in North Carolina ended more than 100 years ago, there may be little or no surface evidence of underground mines.

This report is a compilation of information on the metal mines of the slate belt (currently known as the Carolina terrane) in North Carolina. One of the purposes of this report is to give relatively accurate locations of as many mines as could be located and to include information from the older reports so that the information will again be available. Each mine description includes a detailed location of the deposit, a review of the history of the deposit, the condition of the deposit at the time of the field investigation and a brief description of the geology of the deposit. Fieldwork for the project was begun by W. Richard Hahman in March, 1966, and he carried out the field investigations until September, 1969. During that time, Hahman located and described 119 mines and prospects. His fieldwork covered the counties of Alamance, Chatham, Davidson, Franklin, Granville, Guilford, Halifax, Harnett, Johnston, Lee, Moore, Nash, Orange, Person, Randolph, Vance, and Wake. Most of the written descriptions of the deposits in those counties were taken directly from Hahman's notes. The present author completed the investigations from June, 1970 until January, 1971, during which time 76 mines and prospects were located and described. All of the mines and prospects were plotted on N. C. State Highway Commission county road maps at a scale of 1/2 inch = 1 mile. Includes map.

The locations of many state-wide historic and active mines, quarries, prospects, and pits can be viewed on the USGS Mineral Resources On-Line Spatial Data interactive map. 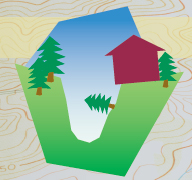 Whether because of rock type or human activity, there are many reasons why the ground can sink into a hole. These phenomena don’t just happen in Florida. In North Carolina, sinkholes mainly occur in the southeastern Coastal Plain counties of Brunswick, New Hanover, Pender, Onslow, Jones, Lenoir, Craven and Beaufort (fig. 17). When sinkholes are common in an area, the area is said to have karst topography. A sinkhole starts when water seeps down into limestone or other soluble rock like dolomite or marble, following cracks in the rock (fig. 18). 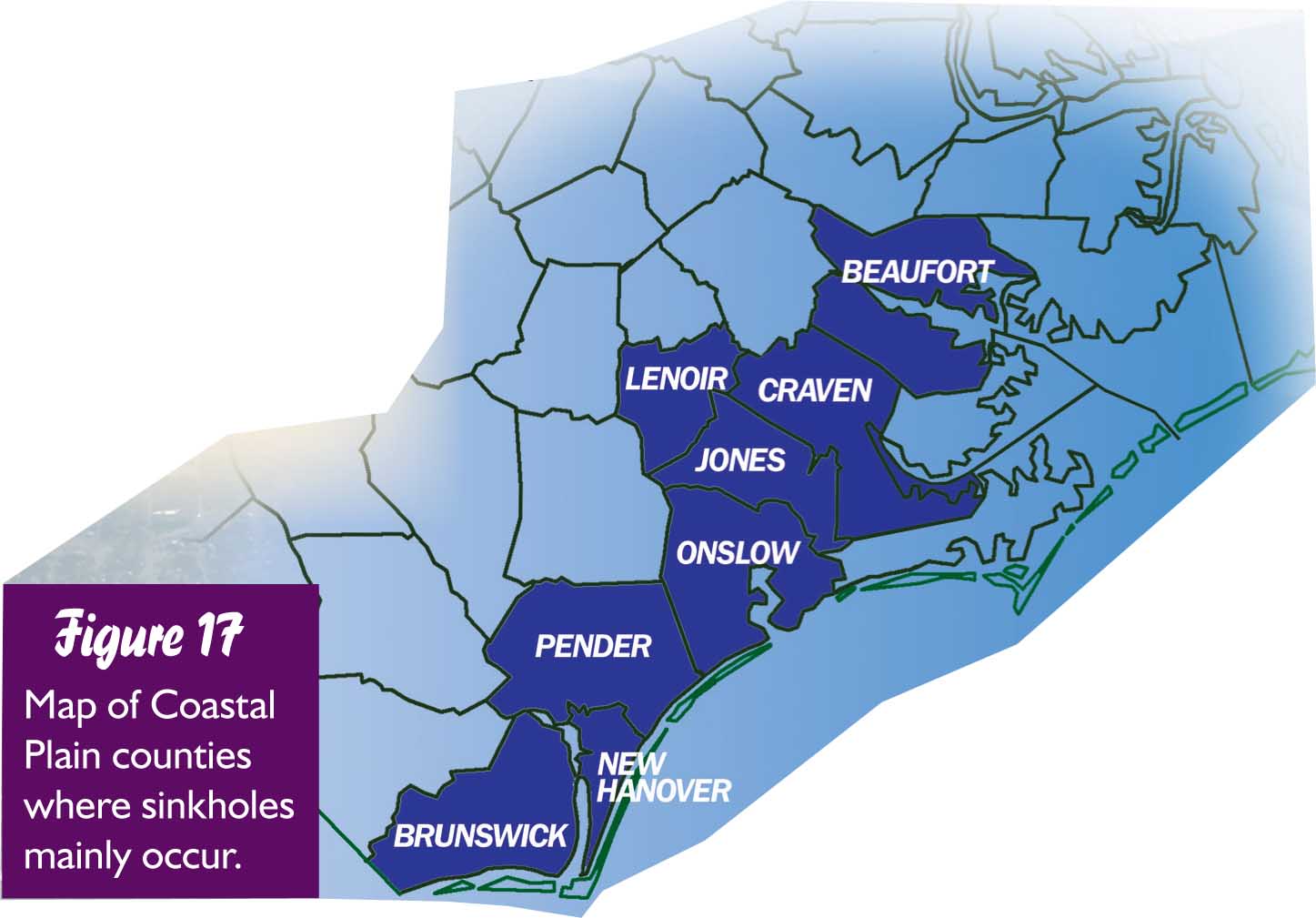 The coastal population is growing, as is the region’s need for water. As more water gets pumped out of the ground for public and private use, the water level in the limestone cavities will drop. When the water is no longer in the cavity to help support the ceiling, the cavity will be more likely to collapse, forming a sinkhole.

Sinkholes come in many shapes and sizes. In North Carolina, some of these sinkholes fill with water, forming ponds or lakes, like around the town of Boiling Springs Lake and Sunny Point Military Ocean Terminal in Brunswick County (figs. 19A and B). Many of these areas are being developed for suburban living with lakefront property. 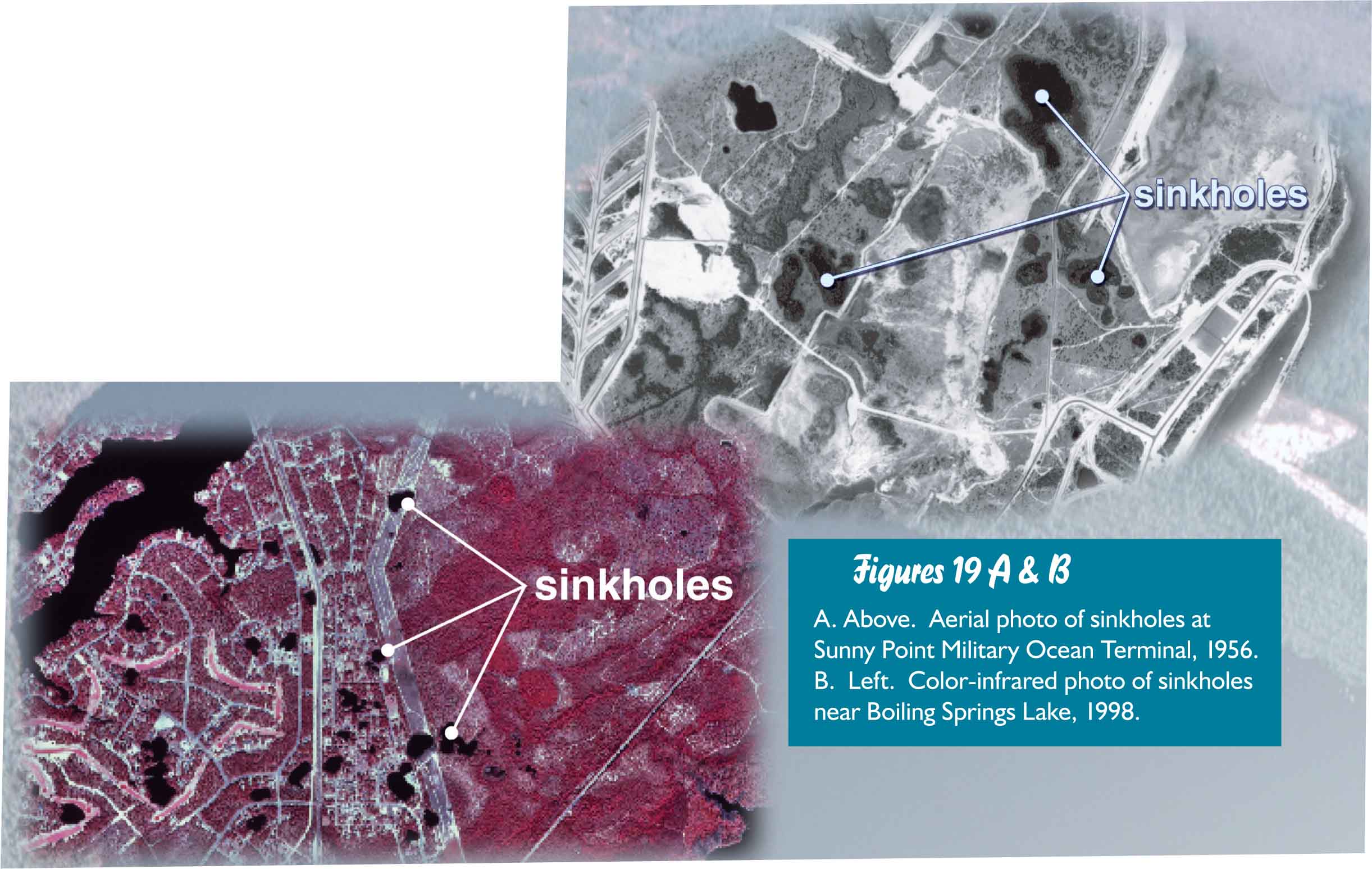 Not a Sinkhole - Another pond or lake-forming feature in North Carolina is a Carolina Bay. Although scientists are still trying to figure out how these features were made, they are very different from a sinkhole. They can be much larger than a sinkhole, but much shallower and do not overlie underground cavities. Most have an oval shape pointing in a northwest to southeast direction. Bay Tree Lake and White Lake are large Carolina Bays (fig. 20). Not all Carolina Bays form lakes; some have been drained for agriculture and some are swamps (fig. 20). 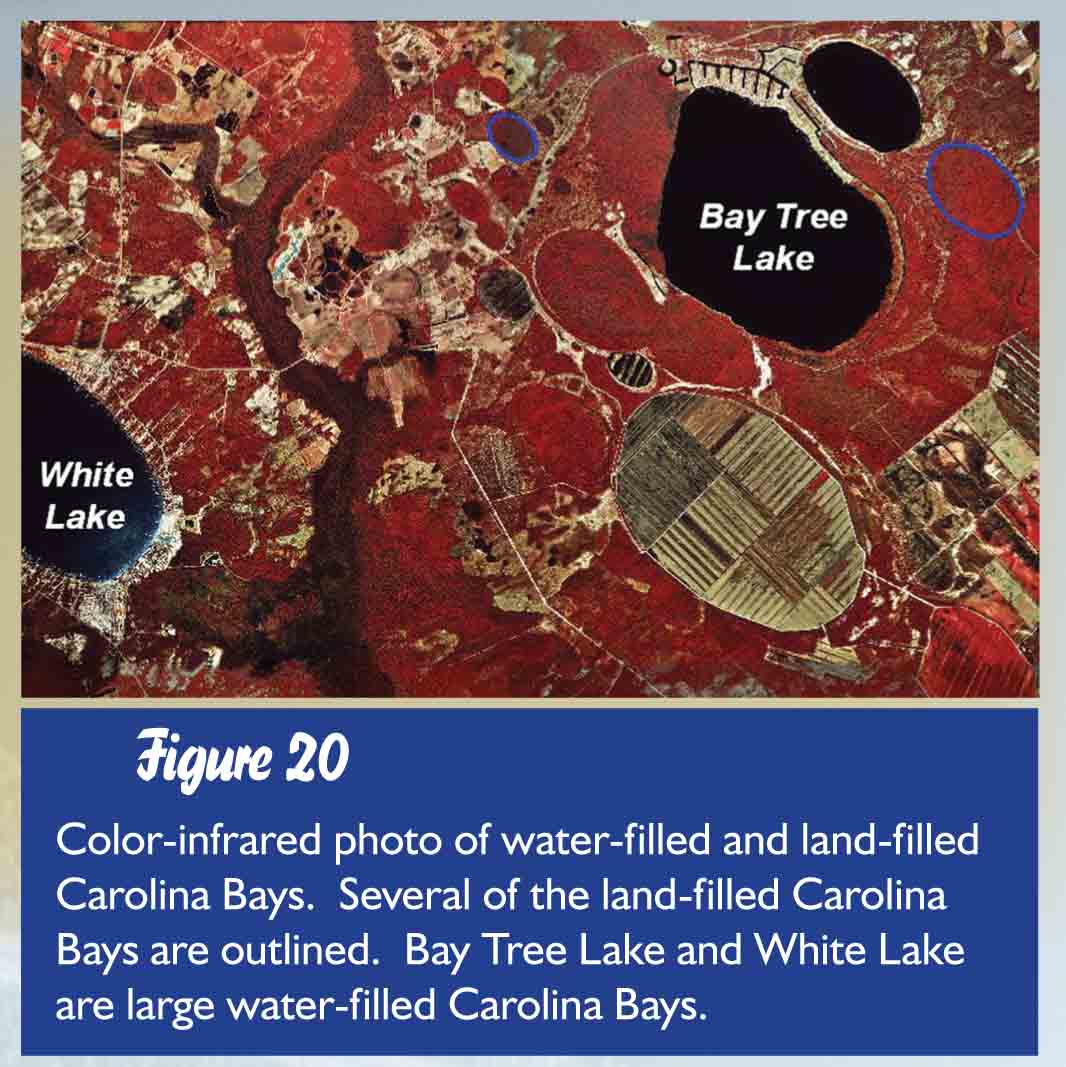 How this affects you:

Our state’s population growth and development, with its increasing housing and transportation needs, may be significantly affected by sinkholes. A sinkhole formed under I-40, a major transportation route near Wilmington, in the summer of 2001. Knowing the geology beneath the ground can assist in determining where surface geologic hazards may occur.

Land subsidence, up to 0.25 inches/year, has been documented in the North Carolina Coastal Plain and is interpreted to be the result of groundwater withdrawal.  Additional information can be found on the USGS (http://water.usgs.gov/edu/earthgwlandsubside.html) and NC Division of Water Resources websites (http://www.ncwater.org/Permits_and_Registration/Capacity_Use/Central_Coastal_Plain/landsub.php).

Land subsidence can also occur when organic soils are drained for agriculture or other purposes.  North Carolina has large areas underlain by peat deposits.  If drained, the potential to subside is probable.  The NCGS publication Ingram (1987) details the locations of peat deposits in eastern North Carolina.  The publication can be viewed at the NC Department of Cultural Resources.  There are likely unmapped areas within the Coastal Plain underlain by organic-rich soils that may warrant investigation before construction activities.