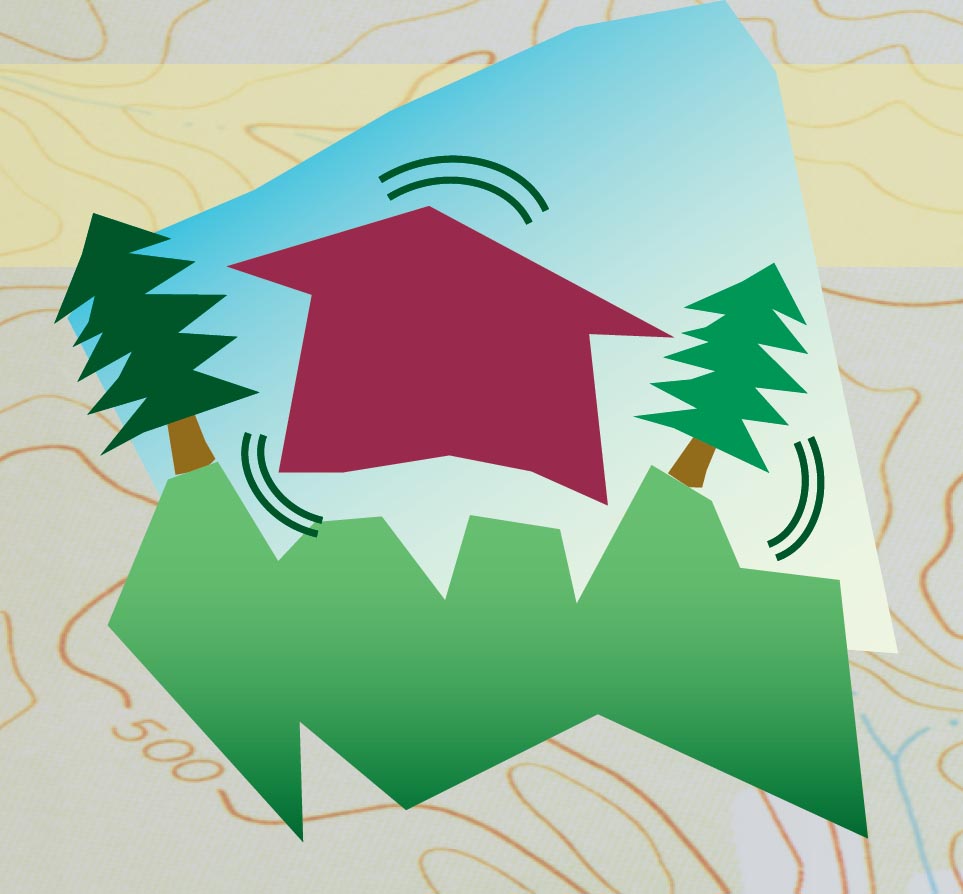 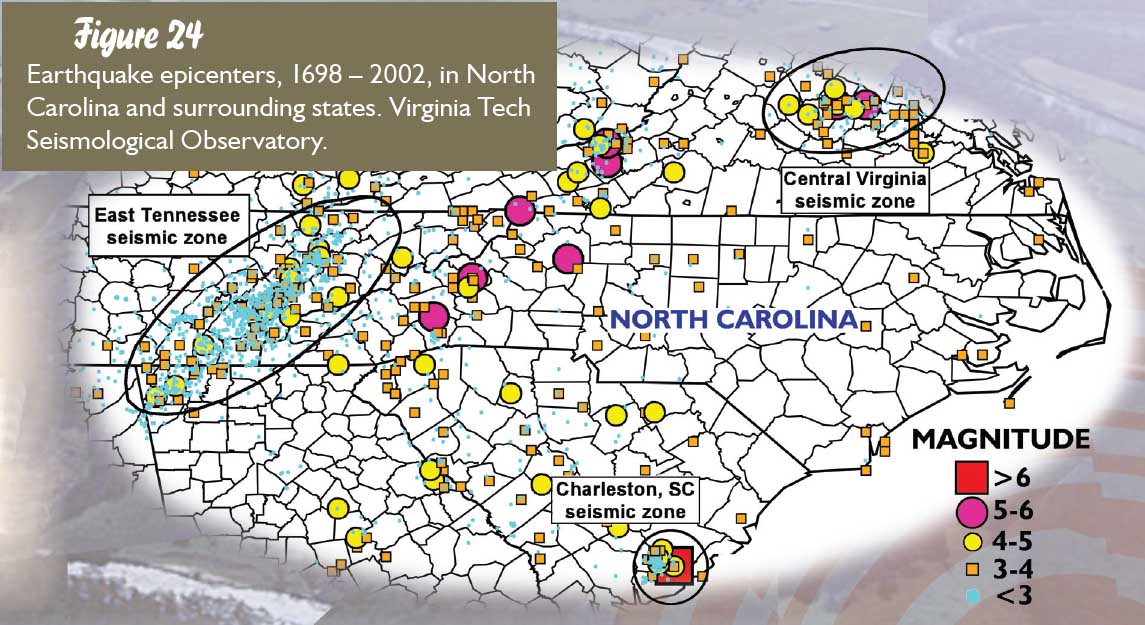 Circles and squares represent earthquake epicenters and bigger symbols represent larger magnitude earthquakes. The effects of an earthquake cover a much larger area than the location of the dot or epicenter.

The long cluster of circles stretching from Tennessee through the edge of western North Carolina into northern Georgia is known as the Eastern Tennessee seismic zone, or earthquake zone. Scientists are studying this area to determine why so many earthquakes happen here. There are also small clusters of earthquakes in other areas of the southeast. On Dec. 9, 2003, a 4.5 magnitude earthquake near Richmond, Va., was felt in areas of Raleigh. This earthquake occurred in the Central Virginia seismic zone. The 1886 Charleston earthquake occurred in the Charleston, S.C., seismic zone. It is very important to realize that even though North Carolina and the east coast of the United States experience occasional earthquakes, this area is not a seismically active area like California and the West Coast. In California there are many active faults where large, damaging earthquakes occur frequently. In contrast, there are no active fault zones in North Carolina. Earthquakes are more frequent in the western part of our state, but statewide they are relatively small, random and scattered events.

Scientists use various scales to determine the strength of an earthquake (fig. 25). 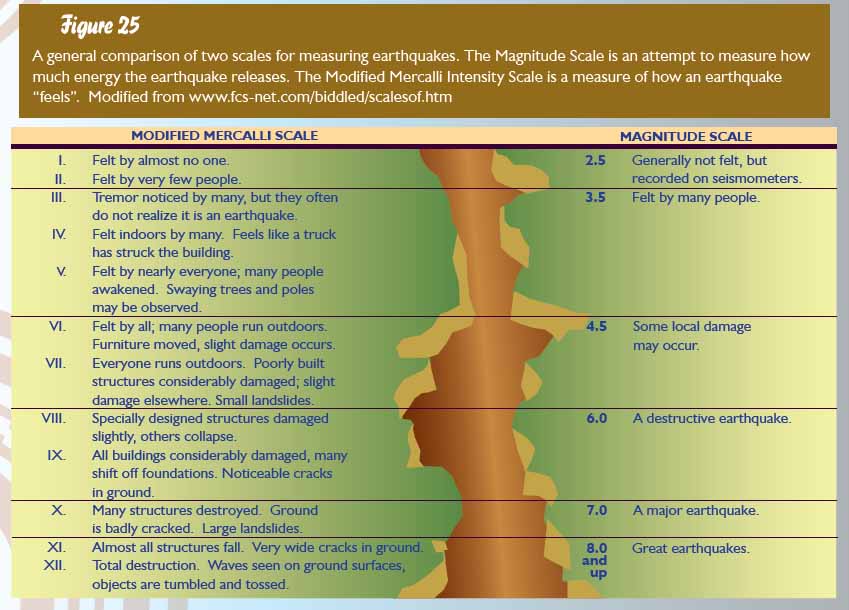 Two of those scales are the Magnitude Scale and the Modified Mercalli Intensity Scale. The Magnitude Scale is an attempt to measure how much energy was released by the earthquake and is the number that most people associate with an earthquake, for example “magnitude 3.” The Modified Mercalli Intensity Scale describes how earthquakes “feel” and how much destruction the earthquake causes. This scale has twelve levels designated by Roman numerals I – XII (one through twelve), to symbolize the amount of damage felt by the earthquake. Many factors determine the intensity of an earthquake at the surface of the earth, such as the depth where the earthquake originates and what kinds of rock and soil are at the surface.

There have been a few strong earthquakes in our mountain region in the last 100 years. As referenced in the United States Geological Survey Professional Paper 1527, in 1916 there was a magnitude 5.2 earthquake, with an intensity of VII (7) on the Modified Mercalli Intensity Scale, near Skyland in Buncombe County (fig. 26). 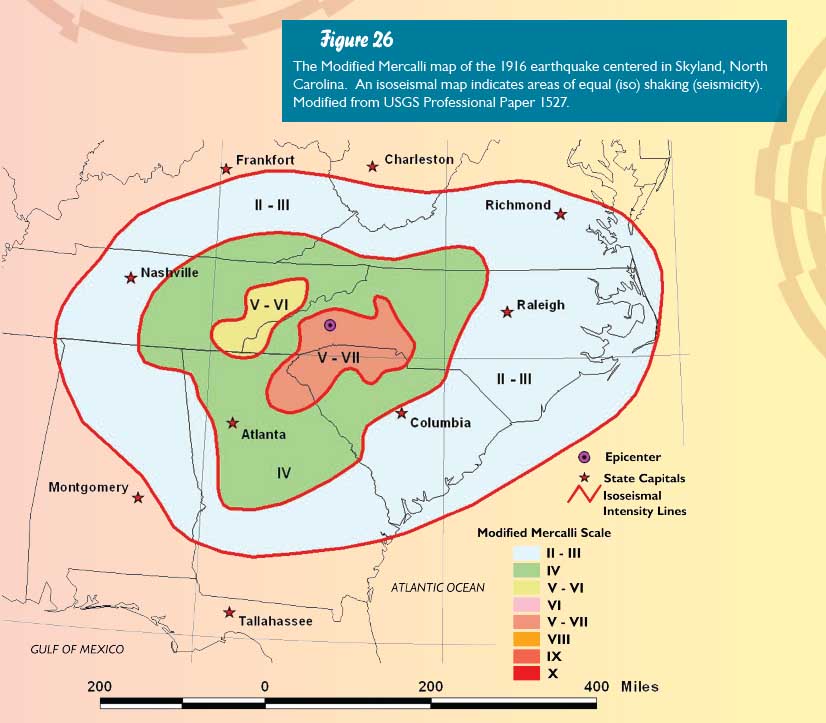 Damage descriptions from the earthquake include “Chimneys were thrown to the ground, windowpanes cracked and people rushed into the streets.” The Modified Mercalli map of intensity shows how far the effects of the 1916 earthquake were felt (fig. 26).

In 1886 there was a large earthquake centered in Charleston, S.C. It was estimated to be a magnitude 6.7, with an intensity of X (10) on the Modified Mercalli Intensity Scale (fig. 27). 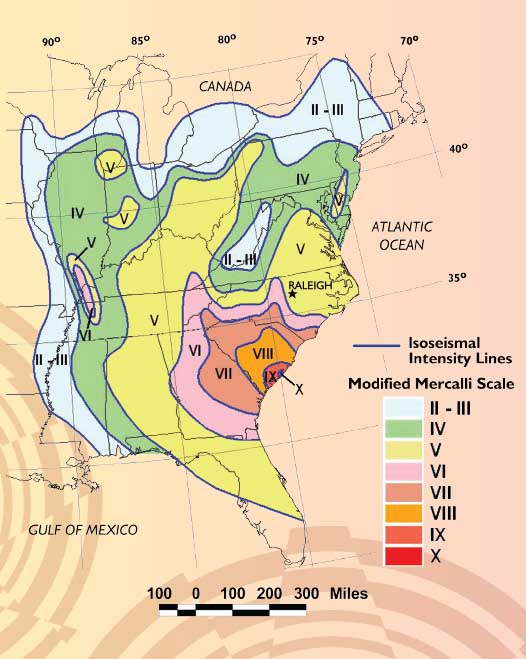 Figure 27: The Modified Mercalli map of the 1886 earthquake centered in Charleston, S.C. This earthquake was “felt” in a much larger area than the 1916 earthquake (fig. 26). An isoseismal map indicates areas of equal (iso) shaking (seismicity). Modified from USGS Professional Paper 1527.

This earthquake was felt up and down the East Coast and throughout the Midwest. It was the most damaging earthquake in the Southeast and one of the largest earthquakes in the eastern United States in historical times. Compare the area affected by the Charleston earthquake to the area covered by the 1916 North Carolina earthquake. Here in North Carolina the effects of the Charleston 1886 earthquake ranged from a V (5) to VII (7) on the Modified Mercalli Intensity Scale. Earthquakes happen every day around the world. We do not hear about most of them in the news because they are small or they shake isolated areas where few people live.

Things to consider:
Although strong earthquakes here in North Carolina are infrequent, proper construction techniques need to be followed. An earthquake of magnitude 5 or greater could block major transportation routes in the mountains and cause structural damage elsewhere.

How this affects you:
Many of the larger earthquakes in North Carolina occurred when the state was more rural. Recent development includes buildings and infrastructure such as road and power networks. Modern building codes take into account the possibility of an earthquake but many older buildings were not constructed to withstand violent shaking.