Radon in air and groundwater

Radon is a naturally occurring gas formed from the natural (radioactive) breakdown of uranium in rock, soil and water.  Radon gets into the air you breathe.  The US EPA has set recommended radon levels in air and drinking water.  As in other places in the US, North Carolina Radon levels are directly related to the underlying rock type and vary throughout the State.

Information on indoor radon is provided by the NC Radiation Protection in the Department of Health and Human Services: http://www.ncradon.org/Home.html

Additional information on indoor radon is provided by the US EPA: http://www.epa.gov/radon/states/northcarolina.html

The NC Geological Survey in collaboration with staff of the North Carolina Division of Water Resources have developed an Areas of Relative Susceptibility to Elevated Radon in Groundwater in North Carolina map.  The map was first presented at the 2014 Southeastern Section of the Geological Society of America.

Arsenic is a naturally occurring element in rocks, soil and water.  When rock weathers, arsenic can be released into the environment from the breakdown of arsenic bearing minerals.  Naturally occurring arsenic is present in groundwater throughout the state.  The central part of the North Carolina Piedmont, underlain by ancient volcanic rocks, have the greatest number of groundwater wells with detectable and elevated arsenic.  The presence of arsenic in these specific areas of the state are directly related to the underlying rock type.

Long-term exposure to low levels of arsenic may pose health risks to humans.  It has been linked to various forms of cancer as well as other non-cancerous effects.  The maximum concentration of arsenic that is safe to drink is debatable as reports offer different figures. The U.S. Environmental Protection Agency has established a standard, called the maximum contaminant level (MCL), for arsenic in water of less than 10 parts per billion for public water systems. The EPA's maximum contaminant level goal (MCLG) for arsenic is 0 parts per billion.  This means that ideally, water for human consumption would have no detectable level of arsenic.

Naturally occurring As in groundwater is present throughout North Carolina ranging in concentrations from 1 to 800 ppb.

The NC Geological Survey in collaboration with staff of the North Carolina Division of Water Resources developed a draft Arsenic Occurrence in Groundwater in Orange and Durham Counties information poster.

The NC Geological Survey in collaboration with staff of the North Carolina Division of Water Resources developed an Areas of Relative Susceptibility to Detectible Arsenic in Groundwater in Orange County, NC information poster. 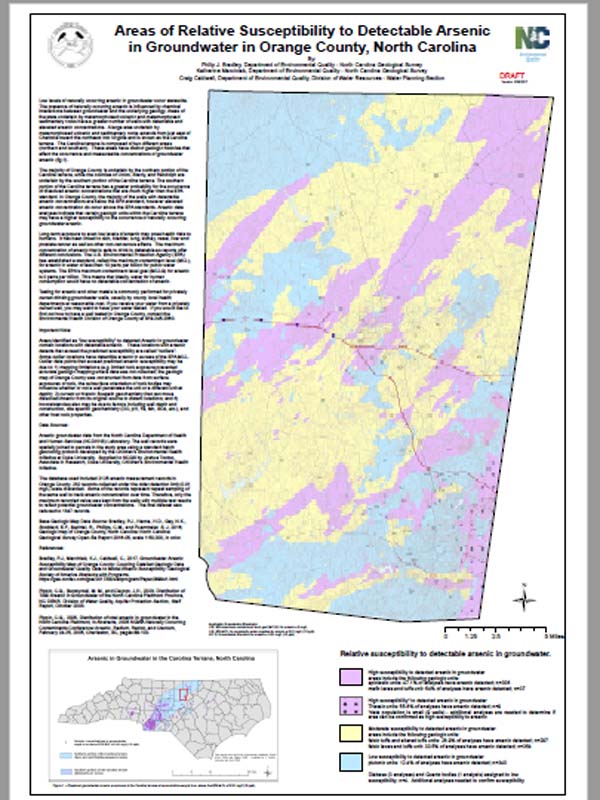