From time to time, the Division of Marine Fisheries is called on to assist in the administration of various state and federal economic relief programs. Learn about these programs here.

More than $7.6 million in federal financial relief is on its way to eligible members of fishing industries that sustained income losses or damages from Hurricane Florence.

North Carolina received about $7.7 million from the National Oceanic and Atmospheric Administration (NOAA) to assist in the economic recovery of losses and damages caused by Hurricane Florence through direct payments to qualified participants. $92,654 was used for administration of the relief program.

Financial payouts were based on the loss of revenue in the months of September, October, and November of 2018 relative to the previous three-year revenue average during the same time period, along with damages caused by Hurricane Florence. Applicants were required to provide an affidavit, a North Carolina Substitute W-9, and supporting materials that documented revenue loss and property damage.

Commercial fishermen and aquaculture operations were compensated by the State Funded Hurricane Florence Relief Program in 2019 and therefore were not eligible to apply for this program unless they were also a member of an eligible stakeholder group.

More than $4.4 million in financial assistance was available via the Consolidated Appropriations Act of 2021 (CARES Act II) to eligible fisheries participants of North Carolina who sustained income losses in 2020 due to COVID-19. Applications were mailed to licensed participants on August 13, 2021. The application documents (application, affidavit, W-9), and final report can be viewed below.

For questions about this relief, email covid19relief@ncdenr.gov.

More than $5.2 million in financial assistance is on its way to eligible members of the fishing industries who sustained income losses in the spring of 2020 due to COVID-19.

The N.C. Division of Marine Fisheries issued funds this week to 197 commercial fishermen and marine aquaculture operations, for-hire fishing operations, and seafood dealers and processors deemed eligible for assistance from the federal Coronavirus Aid, Relief, and Economic Security (CARES) Act Fisheries Relief Program. Payments were made in the following categories: 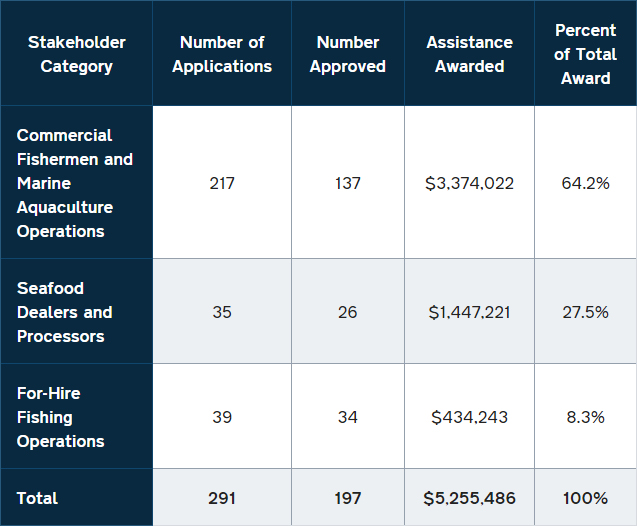 An additional $161,287 went toward Division of Marine Fisheries administrative costs.

Hurricane Florence made landfall on September 14th, 2018. With its landfall came record breaking levels of rainfall, historic storm surge levels, and high winds which caused extensive damage to the area. After the storm, the North Carolina General Assembly passed two session laws (2018-136 and 2018-138) which allocated a total of $11.6 million of aid for the commercial fishing industry (links found in table below). The relief funds allocated to the North Carolina commercial fishing industry were distributed by the NC Division of Marine Fisheries

The goal of the Hurricane Florence Fishery Assistance Program was to disperse funds to the commercial fishing industry.  There were three primary objectives:

Eligibility requirements to receive aid were defined in Session Law 2018-138. Based on these requirements, the North Carolina Trip Ticket Program distributed financial relief to eligible commercial fishermen based on their potential losses due to Hurricane Florence in September, October, and November 2018 compared to their average landings in September, October, and November of 2015 to 2017. A summary of the 2018 legislation, and the NOAA National Hurricane Center Report can be found in the table below.

Distribution of aid occurred in two phases, losses that were incurred during September and losses that were incurred during October and November combined. The distribution of funds occurred over multiple check writes as late responders and disputes were processed and approved. In total, 1,176 participants across 39 different counties received aid. The total loss across fishermen that qualified for the program and sustained lost commercial fishing income in those months in 2018 based on trip ticket data was estimated at almost $15 million.  The money allocated to the Hurricane Florence Commercial Fishing Relief Program allowed fishermen to be compensated for around 77% of their average revenue from commercial fishing between September and November.

An analysis of the NC Trip Ticket Program (NCTTP) data for the months of September to November for participants who received aid showed that Hurricane Florence had a negative impact on several commercial fisheries including the blue crab pot, shrimp trawl, ocean gill net, flounder pound net, oyster, and hard clam fisheries. Most of these fisheries are based in estuarine waters (except for ocean gill net) and tend to be highly productive during the late summer and fall months.  The 2018 landings in the blue crab pot and shrimp fisheries declined by nearly 50% compared to the average of 2015–2017.  The hard clam fishery was impacted more severely, with over a 70% reduction.  The oyster, flounder pound net, and ocean gill net fisheries showed reductions of 25% to 35% in landings when compared to the average landings from 2015–2017. A fact sheet going over statistics and data interpretations can be found in the helpful links below, along with a copy of the final report.