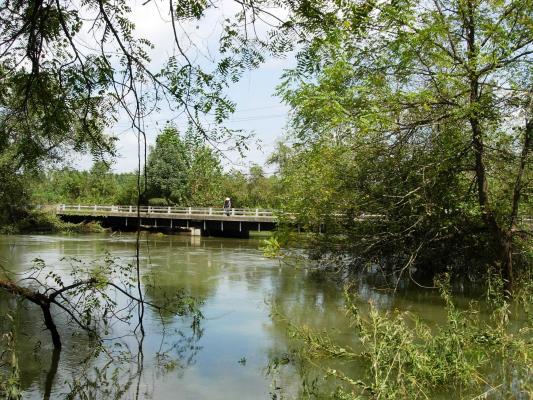 The North Carolina portion of the French Broad River basin is 2,830 square miles and lies entirely in the Blue Ridge ecoregion. The French Broad River originates in Transylvania County and flows north for 210 miles through Western North Carolina into Tennessee, where it joins the Holston River near Knoxville to form the Tennessee River.
The French Broad basin has a varied landscape. Much of the basin is forested, with approximately one-fourth of the land in the Pisgah National Forest, Dupont State Forest and the Great Smoky Mountains National Park.   Broad rich valleys of the river itself and some tributaries are important agricultural lands, kept in pasture and crops such as tomatoes, corn and sod. The basin also has some of the largest urban areas in the mountains, including the municipalities of Asheville, Waynesville, Hendersonville and Black Mountain.
The basin comprises most of Transylvania, Henderson, Buncombe, Madison, Haywood, Yancey and Mitchell counties; it also contains a small portion of Avery County. According to the 2000 census, the basin’s population was about 395,000 (based on the percentage of the census blocks that fall in the basin). The basin’s population is growing at a considerable rate, with counties growing at an estimated rate of between 10 percent (Mitchell) and 30 percent (Henderson) between 2000 and 2020.
The French Broad River Basin contains 53 14-digit watersheds.  In 2005, 29 were prioritized as Targeted Local Watersheds (TLWs) in the basin's Watershed Restoration Plan.
In the 2009 update, an additional two watersheds were newly identified as TLWs, and two 2005 TLWs had their status removed. In total, 29 watersheds are prioritized as TLWs by EEP in the 2009 RBRP document.