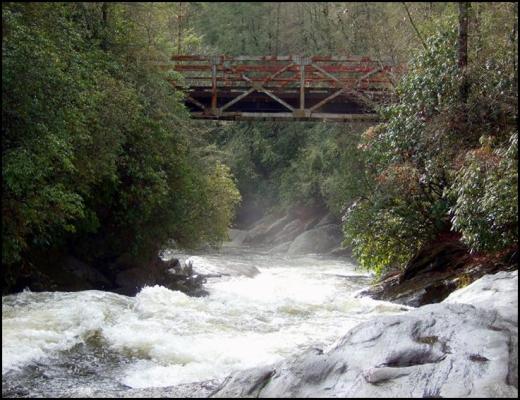 The Savannah River basin in North Carolina consists of two eight-digit CUs [03060101 and 03060102] and comprises the northernmost headwaters of a 9,850-square-mile river system stretching along the South Carolina-Georgia border and emptying into the Atlantic Ocean near Savannah, Ga. The North Carolina portion of the Savannah basin, located along the southeastern flank of the Blue Ridge physiographic province, amounts to approximately 171 square miles, making it the smallest river basin in North Carolina.

The eight local watersheds (14-digit HUs) comprising the Savannah basin have forest cover ranging from 87 to 96 percent, agricultural lands of 1.5 to 3.2 percent, and total impervious cover at less than one percent (based on 2001 land cover data). Composed of relatively small portions of Clay, Macon, Jackson and Transylvania counties, the basin includes urbanizing areas and significant impervious cover around the resort towns of Highlands and Cashiers. Much of the residential and resort development in the basin is concentrated along the U.S. Highway 64 corridor.
Population information summarized in the 2007 Savannah River Basinwide Water Quality Plan reported an estimated population in the basin of 11,500 in the year 2000. Population growth from 2000 to 2020 is projected to range from approximately 11 percent (Transylvania County) to 35 percent (Clay and Macon counties). Concentrated areas of intense residential and golf course development are reported at several locations across the basin, especially in the areas surrounding Cashiers and Highlands. Such development has the potential to threaten the relatively pristine water quality currently reported at most N.C. Division of Water Quality sampling stations in the Savannah basin.
The original Savannah RBRP developed in 2001 by the Wetlands Restoration Program identified a single Targeted Local Watershed as the focus for stream, wetland and riparian-buffer restoration and protection efforts. The 2008 RBRP designated two additional TLWs for the basin. The 2018 interim amendment is intended to provide current information regarding planning activities, supplement information regarding land cover within each 8-digit hydrologic unit, restore document links and maintain accurate contact information.